Cambridge, Mass., May 25, 2017 — At its annual awards dinner, held at the MIT Media Lab, the New England Motor Press Association honored four individuals for their outstanding contributions to the automotive industry and awarded trophies for their annual NEMPA Winter Vehicle, Ragtop and Automotive Excellence Awards.

“NEMPA members have a distinct regionalized point of view that makes the Winter Vehicle and Ragtop Awards very special and unparalleled,” said NEMPA President John Paul. “Vehicles that allow people to not only survive winters in New England, but thrive in them – as well as make the most of the summer season – are key factors to selecting the winners of these awards.”

“We also like to recognize individuals that significantly contribute to the success of the industry,” John Paul explained. “Herb Chambers, Alan Bethke, P. J. O’Rourke, and Steve Oldham were honored this year.”

The NEMPA Executive of the Year Award 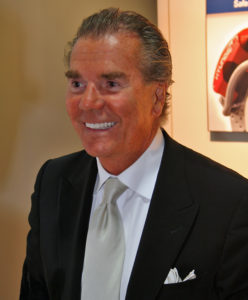 Herb Chambers is the President of the Herb Chambers Companies.  In 1985, Herb purchased a new Cadillac in New London, Connecticut and became so frustrated at the way he was treated that within an hour he purchased not only the Cadillac, but bought the dealership, too. At that time, there were 31,000 automobile dealers in the United States and Herb became number 31,001. The acquisition of several other dealerships followed soon thereafter.

Herb has always been a car enthusiast at heart and has now spent 30-years in the automotive industry. He continues to grow The Herb Chambers Companies and is expecting to acquire three additional dealerships in 2017.

NEMPA members honored him with the award for many reasons that make The Herb Chambers Companies and employees successful. The Herb Chambers Companies stand out in selling style, commitment to customer service, and brand management strategy. NEMPA members also recognized that he is a very dedicated and caring leader with a tireless work ethic and entrepreneurial spirit.  He also takes the time to passionately share his knowledge and experience with others.

The NEMPA Marketer of the Year 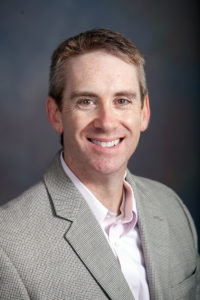 The New England Motor Press has named Alan Bethke Marketer of the Year for the continued success of the Subaru “Love” campaign that has had a tremendous impact on the incredible sales success story the brand is enjoying. 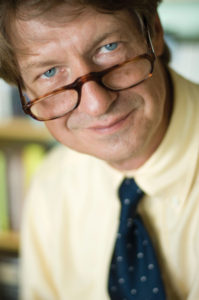 NEMPA presented P. J. O’Rourke this award for being an individual who has emulated the enterprise, collegiality, helpfulness, integrity and good will that marked the career of Charlie Dole, for many years the automotive columnist for The Christian Science Monitor and dean of the New England automotive press corps.

J. O’Rourkehas written nineteen books on subjects as diverse as politics and cars and etiquette and economics. Parliament of Whoresand Give War a Chance- both reached #1 on the New York Times bestseller list. His most recent book is How the Hell Did This Happen?: Election of 2016. He is a contributing editor at the Weekly Standard, H. L. Mencken Research Fellow at the Cato Institute, a regular panelist on NPR’s Wait Wait… Don’t Tell Me, and a columnist for The Stansberry Digest investment letter. He lives in rural New England, as far away from the things he writes about as he can get. 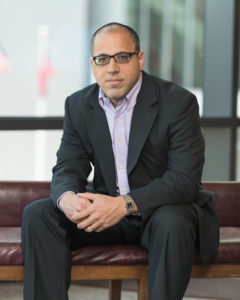 Steve Oldham has won this award that is presented to a member of the automotive public relations corps who has consistently and with good humor and genuine helpfulness risen to NEMPA’s often untimely and burdensome requests, rather than allowing them to be the proverbial “straw that broke the camel’s back.”

Steven Oldham is the Northeast Public Relations Manager for Nissan North America.  Steven became Northeast public relations manager in July 2005.  In this role, he leads all communications efforts for the company in the Northeast and Mid-Atlantic regions.  Specific responsibilities include all media relations for both product and corporate communications from Boston to Washington, DC.

Oldham has nearly 20 years experience in the automotive industry.  He started his career out of college in 1997 at Fred Mackerodt, Inc. where he was responsible for pick-up and delivery of General Motors press vehicles on the East Coast.  A year later, he moved on to A&M Specialists in NJ where he was in charge of various automotive press fleets that included Mitsubishi, Hummer, VW, Audi and Jaguar.  In 1999, Oldham went on to work for Mike Geylin at Kermish-Geylin Public Relations where he was in charge of national Porsche major media programs, Exide batteries communications among others.

Oldham holds a Bachelor of Arts in communications from Rider University in Lawrenceville, NJ. 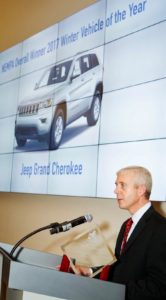 Accepting the 2017 NEMPA Overall Winner of the  Winter Vehicle of New England Award was Scott Tallon of Jeep for the Jeep Grand Cherokee Trailhawk.

The Winter Vehicle of New England

In this hotly contested race it was close between the Jaguar F-PACE and Jeep’s own Cherokee. The Grand Cherokee was selected by NEMPA members due to its ability to go anywhere, selection of engine choices and a “just-right” size. The Grand Cherokee is no stranger to winning the coveted NEMPA winter vehicle award having won several times in the past five years.

The all-new Golf Alltrack won the category overwhelmingly with its general appeal, maneuverability and a first class Volkswagen interior.

Making another return visit to the podium is the Dodge Charger, a fun four-door all-wheel drive sedan with hulking good looks and plenty of features NEMPA members liked. These included a user-friendly touch-screen, full complement of safety features, and, for those who desire it, a 707-horsepower Hellcat edition.

The ever-popular Subaru Outback continues to shine as a great all-wheel drive vehicle. Due to its popularity in the Northeast, some refer to the Outback as the official state-bird of New England. Unquestionably, it’s a solid, comfortable, reliable winter-ready wagon that won’t break the bank.

NEMPA members like the A4 allroad’s sportscar-like handling, ability to go anywhere including off-road, and an interior that is a standard by which other cars are judged.

Legendary safety with stylish good looks and a premium quality interior are some of this big Volvo’s strong points. 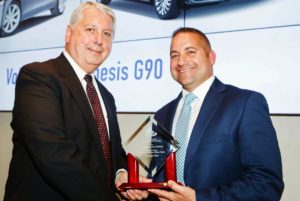 This G90 is a new entry to the luxury car category and checks off every box including all-wheel drive. It’s easy to see why this big Genesis was a hit with NEMPA members.

The Cherokee Trailhawk was able to conquer everything that this past winter was able to throw at it. NEMPA members had confidence behind the wheel of the Trailhawk both on- and off-road, many thinking it was the perfect all around vehicle for New England.

Mazda managed to put “Zoom-Zoom” in this midsized SUV while blurring the line between affordable and luxury competitors.

Nissan landed in just the right spot with the Armada offering rugged good looks, power to tow up to 8,500 pounds and seating for seven – all in a package that’s large but not too big. 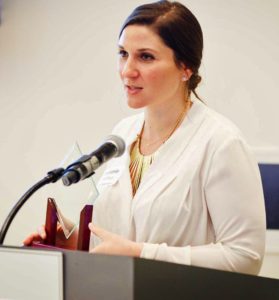 It’s a Jaguar and a SUV. Years ago the idea that Jaguar would build an SUV was considered blasphemous, but in today’s marketplace, Jaguar was able to pull it off. The F-PACE speaks volumes about how with its great handling, sophisticated interior and stylish good looks.

Plush ride, powerful engine, plenty of tech, and comfortable seating, put the Infiniti QX60 at the top of the mid-size luxury SUV/Crossover category.

The Range Rover is a perennial favorite with NEMPA members and for good reason. Premium style, gasoline and diesel engine choices, and notable fuel efficiency, make the Land Rover Range Rover a winner. Plus, with the Land Rover Terrain Response system providing superior on- and off-road performance, drivers sit up high, survey the world around them, and enjoy all the comfort and dependability that this Range Rover has to offer.

The Ridgeline was described by many as the “Swiss Army Knife” of pickup trucks. It can tow, has great storage, novel features and Honda’s legendary reliability.

This is the first time a non-all-wheel drive vehicle has won this category. NEMPA members loved the versatility, seating comfort and technology — for families no more, “Are we there yet?”. 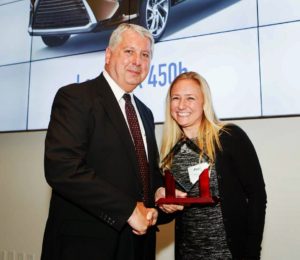 The Lexus RX 450h manages to hold its luxury head high while being kind to the environment. Powerful and fuel efficient, it’s able to reach 60 miles per hour in seven seconds, while still getting 30 miles per gallon. That is impressive for any SUV and this Lexus does it with style.

This is a category for New Englanders who appreciate good value, while realizing that lower price doesn’t dictate a good value. The Outlander Sport and Kia Sportage both offer a high level of content, good fuel economy and reasonable prices in a great all-around package 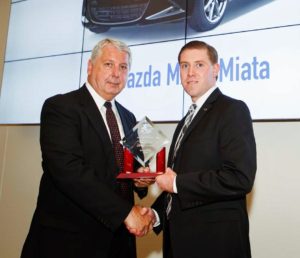 Head out on a nice summer night or on a trip to the beach and you’ll understand why the Miata just feels right. There are those who don’t like change and the new Miata has changed – but in the words of NEMPA members, the latest Miata may be the best to date.

The SLC300 puts a priority on year-round comfort, a quality interior and stylish good looks. The athletic 2-liter turbocharged engine is frosting on the cake.

The stylish Jaguar F-TYPE convertible provides a wealth of reasons to be recognized with this award starting with its smooth and powerful engines that make no apologies for their mellifluous muscle car exhaust notes. Add in the idea that buyers can opt for a true manual transmission and all-wheel drive and it’s easy to see how the F-TYPE seduced NEMPA members. 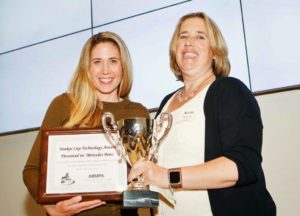 Selected with input from the faculty at MIT, the Yankee Cup goes to a vehicle,  automotive feature, or system that significantly enhances the motoring experience, whether by making driving safer, more cost-efficient or simply more enjoyable.

2018 Lexus LC 500
Selected with the Boston Museum of Fine Arts and the Larz Anderson Auto Museum, this award honors the best in automotive design. It is named for the late Gene Ritvo, a veteran concours photographer and NEMPA member who had a keen eye for elegant design.

Selected by NEMPA members, this honor goes to the automotive supplier that has made significant contributions to the industry.  Often suppliers are the unsung heroes behind the major advancements in the business.  Suppliers can be nominated for a component, system or technology that significantly enhances the motoring experience, whether by making driving safer, more cost-efficient or simply more enjoyable. 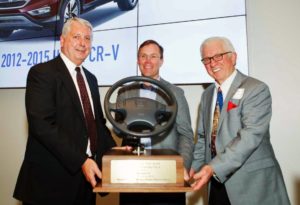 WheelsTV in association with the New England Motor Press Association presents The POV of the Year that singles out a pre-owned vehicle that has been in service for at least two years and demonstrates outstanding long-term reliability as well as exceptional consumer satisfaction. The 2017 WheelsTV POV of the Year Award was given to the 2012 to 2015 Honda CR-V. The Honda CR-V has defined the essence of the compact crossover category with its competent performance, comfortable ride and versatile interior. But what distinguishes the fourth generation CR-V from its peers, and drew the attention of the POV of the Year panel of judges, is how well it fit the established criteria for receiving the award.