By Zane Merva on March 11, 2008 in Awards
Feb. 28, 2008 Boston – Early this past February, members of the New England Motor Press association gathered for the 11th annual Winter Vehicle Voting Day. With all eligible candidates available in one crowded parking lot, journalists spent the day evaluating the winter merits of vehicles ranging from pickups to supercars.

One thing they all had in common: power to all four wheels, a feature that definitely makes one’s life easier during the four or so months that New England is subject to potential blizzards. Several hours and gallons of coffee later, the votes were cast, and the 2008 NEMPA Winter Vehicle honorees decided. 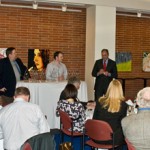