This is a little embarrassing, but for the second time in three years the New England Motor Press Association’s Winter Vehicle Test Day had to be postponed on account of, well, winter.

Each year we put our collective heads together and pool a couple centuries worth of snow-driving experience to come up with the official Winter Vehicle of New England. There are also a dozen or so class winners, divided up by price and type—SUV, sedan, luxury car, sports car, pickup truck and so on. (The Jeep Grand Cherokee has won the overall title for the past two years.)

Around the holidays every year car manufacturers begin to send NEMPA everything they’ve got with all-wheel drive and heated steering wheels. Those vehicles get put through their paces a week at a time by media members; then on a Saturday in February we gather at the Automotion garage for a day of eating, talking, dashing out in twos and threes to drive one car or another, eating, arguing and eating. And finally casting preliminary ballots.

In 2011 we had to postpone this because too much winter fell from the sky the night before. Automotive News, AutoWeek and other publications showed us no mercy. The word “wuss” was never used, but there was a clear undertone of Hey-we-thought-you-Yankees-could-drive-in-the-snow.

And now it’s happened again. What’s worse, two days before Winter Storm Nemo blew in (when did snowstorms get names?), a stern memo was sent to the membership: Postponement would not happen again.

“Road crews will be out all Friday night,” the memo concluded, “and Saturday-morning traffic is likely to be light. Press on! What better test of a ‘winter vehicle’ is there, after all?”

Press on, indeed. Twenty-four hours later another directive had to go out: “OK, the weather forecast has worsened, the testosterone has subsided and reason has prevailed. Despite yesterday’s huffing & puffing, Winter Vehicle Test Day has indeed been postponed until next Saturday, February 16.”

It was suggested the big trophy simply go to whomever made it to the garage on the 9th, but since members live all over New England the handicapping isn’t quite equal. And then our spoilsport governors declared the roads closed anyway.

For close to 48 hours most NEMPA members couldn’t get out of their driveways, much less to the garage in Middleborough.

Let’s keep our fingers crossed for next Saturday. 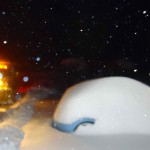 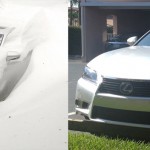 Chrysler 300 ‘Glacier’ edition—now we get it! 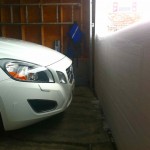 A fortunate Volvo on the inside looking out. 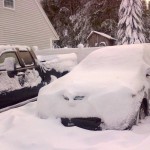 There were no paths for this Nissan to find. 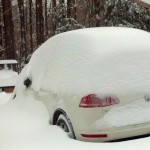 A VW Touareg diesel slumbers through the storm. 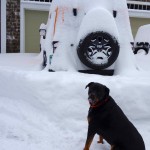 The Rottweiler wants to play. The Wrangler does too. 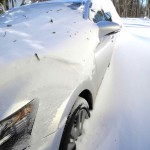 Sunday morning on the coast of Maine. 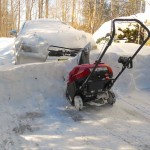 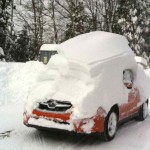 Southern NE got hammered too. A Subaru emerges in Connecticut.

One Response to Too much winter – Again!