At the yearly Ford dinner celebrating the New England International Auto Show, in John Henry’s suite at Fenway Park, NEMPA stalwart Bill Griffith was presented a cake for his 65th birthday. It was an appropriate setting; in addition to being a contributing automotive editor for the Boston Globe, Bill is a voting member of the Baseball Writers Association of America.

The press got its customary sneak preview of the 2012 New England International Auto Show on Thursday morning, January 12. NEMPA members and other media were offered first crack at ride & drives in Chevrolet’s new Volt, Sonic and Malibu Eco and the Buick Regal eAssist and Verano. Camp Jeep, which took up the entire rear of the hall at Boston’s Convention Center, gave the press a chance to put a variety of Jeep 4x4s through their paces on an “interactive adventure zone” test track. (Judging by the long lines and squealing tires throughout the weekend, this was a huge hit with the public as well.) In addition, marketing managers made special presentations of the Fiat 500 Abarth, the Ford Escape and Focus Electric, Mercedes-Benz’s SLS Roadster, the Scion iQ and the Chevy Malibu Eco.

NEMPA joins the Paragon Group in thanking Amica Insurance and the Boston Globe for their presenting sponsorship of the show, and we look forward to becoming even more involved in 2013.

Photos and video of the show are available at http://www.paragonexpo.com/index.php/NE-Press/. NEMPA.org photos below by Bill Griffith, Zane Merva and Silvio Calabi. 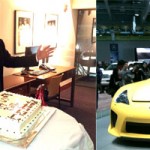