NEMPA’s second technology presentation at MIT draws speakers and audience from across the USA.

Note: Audio & Presentations from the conference are available for download.

Many drivers imagine the autonomous vehicle, or self-guided car, as the solution to vehicular challenges ranging from fatigue and traffic congestion to fuel consumption and accidents. It will enable (or force) us to become passengers behind our own steering wheels, free to snack, doze, read, text and surf the Web while the car takes us over the river and through the woods to Grandmother’s house.

Hold on there, said the experts from BMW, Continental North America, General Motors, Kia, Mercedes-Benz and the Massachusetts Institute of Technology; rein in your imaginations. They were gathered at a conference entitled “The Autonomous Vehicle—2012” at MIT’s Sloan School of Management on May 11. The event was produced by the New England Motor Press Association (NEMPA) and sponsored by United Road Services, North America’s premier automotive transport company.

The autonomous-car concept moved to the front burner when Nevada recently licensed Google’s well-publicized prototype self-guided Toyota Prius for street use—with the proviso that there be two operators on board, one to take control of the car should things go wrong and the other to shut down the guidance systems.

However, instead of complete vehicular autonomy, most of the NEMPA-MIT panelists predicted a continuing trend toward semi-autonomous driving aided by ever-more-sophisticated safety systems.

“[The] Google [car] is hinting at a lot of things, but a car that will drive itself from Point A to Point B isn’t on our radar,” said Christian Schumacher, director of Engineering Systems & Technology for Continental Automotive Systems NA, The North American division of a top-five global manufacturer of auto and truck parts.

But Dr. Nady Boules, head of GM Research & Development’s Electrical & Controls Integration Laboratory, is bullish on autonomous vehicles. “The major components already are in use,” he said. “That includes adaptive cruise control, 360-degree safety sensor arrays, GPS and forward vision, including long-range infrared cameras that see objects and people in the dark long before the human eye, and show them on a heads-up display.”

Boules listed some of the potential benefits of such future cars: “Just imagine—we can eliminate some systems, and therefore weight, and realize an immediate increase in fuel efficiency. Vehicles also would be able to ‘platoon’—drive nose-to-tail in convoys the way race drivers draft on NASCAR tracks.”

Dr. Bryan Reimer, research engineer at MIT’s renowned AgeLab, cautioned that there are many questions to answer before an autonomous vehicle ever rolls down Cambridge’s notorious Memorial Drive: Will drivers trust Advanced Driver Assistance Systems? How will a driver choose when to take  over or accept control of a vehicle? Will experiential learning still take place?

“We have to stop assuming that autonomy alone will solve our [driving] problems. The universal law of learning says the more you drive, the better driver you become,” said Reimer. “But automation will reduce the number of miles actively driven.”

Dr. Reimer showed the audience a bell-curve graph of driving performance with bored and drowsy on one end and overloaded and distracted on the other, and pointed out that people are attentive and focused on driving-related tasks for only a relatively small middle portion of the curve.

“Airliners have a pilot, co-pilot and autopilot,” said Bzeih. “Could an airplane on autopilot have survived a takeoff incident and landed in the Hudson River, as Chesley Sullenberger did on US Airways flight 1549? Then there was the Korean pilot who flew into a mountain in bad weather because he didn’t trust his systems. The question is, can automation and humans coexist?”

Sascha Simon, who leads advanced product planning at Mercedes-Benz USA, described his drive from New York City to the MIT conference in a vehicle equipped with the latest driver aids, including stay-in-lane and lane-centering assistance and adaptive cruise control. “A recent J.D. Power study showed that 37 percent of drivers would consider buying those technologies, and that 20 percent would be willing to pay an additional $2,500 to $3,000 for these features,” said Simon.

He also pointed out that such systems continually evolve through research. Mercedes-Benz, for example, recruits university students to drive a simulator until they are exhausted and measures 72 of their physical parameters during the process. The data allow engineers to develop predictive algorithms that help determine when an automated car should take over for a sleepy driver.

Speaking for BMW, Tom Baloga said, “Autonomy is the holy Grail, but the reality is that we are moving towards highly automated driving [with new] systems that can make a good driver better. These new systems include a heads-up display that’s capable of recognizing a pedestrian or animal, or emergency vehicles or road obstacles, far outside headlight range, or warn that a space is too narrow for a car to squeeze through.

“But who can predict when a child, hidden between two parked cars, suddenly darts out in front of you?”

Baloga noted that while his company believes that BMW drivers are more engaged and attentive than most, studies show that drivers are only actually “driving”—as opposed to talking on the telephone, reading, applying makeup, drinking coffee—54 percent of the time.

Continental’s Schumacher told the audience that, by 2020, most new cars will have 360-degree sensors and stereo cameras with lane-departure and lane-centering technology, sign recognition, adaptive cruise control, automatic stop/go with advanced brake-assist, feedback-enabled pedals and electronic steering. Such systems will have to be “seamless and intuitive” for the driver, he added; “If a feature is annoying, the driver will shut it off.”

“A big step towards autonomous driving will be Traffic Jam Assist,” he said, which will be able to guide a car through slow-moving traffic tie-ups.

Jonathan P. How is an MIT professor of aeronautics and astronautics and a veteran of the DARPA (Defense Advanced Research Projects Agency) Grand Challenge, a competition for driverless vehicles. A computerized MIT Land Rover, bristling with sensors and antennas, took 4th place in the 2007 Urban Challenge and was one of just six of 35 vehicles to finish the 55-mile course. “It’s exciting to see the Google car pushing the frontiers, shortening the time frame, and beginning to address regulatory issues,” said Dr. How. “There are good questions being asked, too, such as about the variability of different driving habits and parking locations.”

Dr. How brought up what he called the “Boston driver perspective” and asked, “How many of you have ever driven through complex road environments such as Harvard Square on a dark, rainy November night with pedestrians crossing everywhere? How will these [self-guiding] systems work then?”

He also wondered about snowy roads where lane markers are obliterated, whether human “predictive behavior” really can be predicted, and the complex processes for certifying the software and algorithms that will run these systems. When systems fail, “the big issue remains that of the human having to take control at any moment.”

And then, as GM’s Dr. Boules reminded the audience, “It only takes a few drivers to create chaos on a busy road.”

Who’d have thought getting from Point A to Point B could be so easy . . . and so complicated? 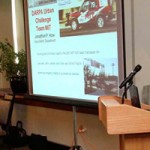