The last thing most businesses want is more government regulation.

Don’t count those working on the autonomous vehicle among them. 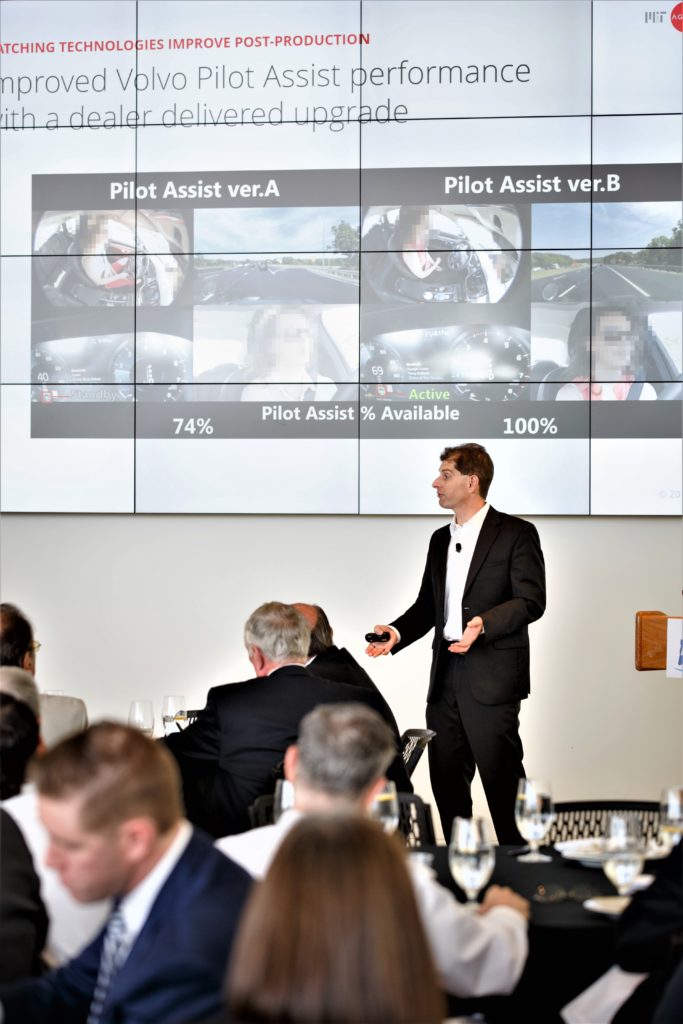 Bryan Reimer, Ph.D – Research Scientist in the MIT AgeLab and the Associate Director of The New England University Transportation Center, delivers the keynote lunch at the 2018 NEMPA MIT Technology Conference at the MIT Media Lab on May 30th.

Reimer was the keynote speaker May 30 at the 8th annual NEMPA MIT Technology Conference at the university’s Media Lab.

This year’s panel discussion with Reimer and four government and industry representatives was more about “making it all work,” how municipalities can work with the technology companies and how software and AI (artificial intelligence and machine learning) can fit into the new age of transportation and mobility.

“All [companies working on autonomous vehicles] have a secret sauce that works, but which also is missing elements,” says Reimer, who was the keynote speaker at the luncheon preceding the panel.

“We’ve got 50 states moving in different directions, and that’s not good,” he says. “It’s leading to an immense future problem. We need a national ethical policy before we let robots rule the road.”

“Today, government agencies mandate recalls based on hardware defects; but new cars are being built around software. Should autonomous vehicles have their own regulatory structure?” asks Reimer.

Not only that, but he posits:

“Can the government and automotive manufacturers work together? And how safe is ‘safe enough’ both now and down the road?”

Carter says that car-sharing and road-sharing are vital to Boston’s future.

“Our population, 560,000 in 1980 will be about 790,000 by 2020. Our roads aren’t growing. And we have a huge income inequality in the city. We must figure out how to infuse bicycles and pedestrians into the mobility structure.

“There’s no way we can continue the one person, one car model.”

And there also is no single solution.

Humatics has developed fixed-beacon technology with sensors on poles and buildings to guide autonomous vehicles in urban areas.

Nvidia, which started as a gaming platform, now is working on AI to build a massive database of machine learning so an autonomous vehicle can sequence Perception-Reasoning-Action to drive on its own.

“The goal is for our Pegasus supercomputer, capable of 320 trillion computations per second, to find the free space to place the car in every situation,” says Russell. “Or guide a fleet of self-driving taxis.”

Solutions can affect our lifespans.

“AAA research shows that the longer people are able to drive, the longer they live,” says NEMPA president John Paul, who moderated the panel.

That melds with Toyota’s goals.

Akio Toyoda, president of Toyota, has a goal of keeping an aging population mobile, one of the driving factors in creating the TRI.

“We’ve partnered with MIT, Stanford, and Michigan in our research,” says TRI’s Fletcher. 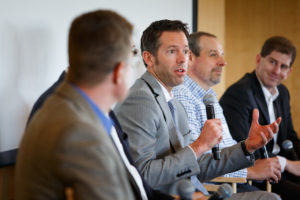 All of which gets us to the intersection where all these interests collide.

“Trust in technology is earned over time,” says Reimer. “But it erodes instantly when a system fails, despite the billions invested. Ninety-eight percent reliability isn’t good enough.”

Coming are Levels 4 and 5 of autonomous driving.

Level 4, a driverless vehicle “working” in a fenced geographical area, such as university or airport grounds, will be first.

Who will get there?

Reimer predicts it will be the entity with the deepest pockets that is able to stay the R&D course.

Among companies, that appears to be General Motors.

But then there’s Google.

“Google is more like a nation-state than a corporation,” says Reimer. “They’ll likely be the last one standing.”