In 2004, “thefacebook.com” launched and provided students at Harvard University a fledgling social network. Twitter wouldn’t come along until 2006. Today, Facebook has 600 million active users, and Twitter’s 200 million users generate around 65 million tweets per day. Such technologies have become pervasive, even behind the wheel. Automakers are daily introducing new ways to connect their customers-“drivers”-to the Internet while on the road. The dangers of distracted driving while posting to social networks, finding channels on Pandora or entering addresses into Google Maps are real and immediate.

On May 20, 2011, the New England Motor Press Association (NEMPA) and the Massachusetts Institute of Technology invited the media and interested parties to the MIT Faculty Club for a panel discussion entitled “Connectivity and the Car,” during which automakers and MIT researchers discussed the challenges of embedding these new technologies in automobiles and the risks inherent in doing so. The gathering was sponsored by United Road Services, whose 1,250 trucks are linked by proprietary hard- and software that streamlines the logistics of delivering cars.

Panelists discussed how social networking, telematics (the “integrated use of telecommunications and informatics in vehicles and in conjunction with controlling vehicles on the move”), the law, human behavior and science have converged on the modern motor vehicle’s instrument panel. Many of these infotainment technologies are similar, but their implementation by automakers is quite different. After the presentations, the floor was opened for a rigorous Q&A session with the audience, which included members of the media, advocacy groups, students and researchers, and businesses impacted by such technologies.

The speakers made it clear that consumers have an insatiable appetite for information and entertainment technologies, and that integrating these into a moving vehicle without compromising safety is the challenge for automotive manufacturers. “Customers are going to use their smartphones in their cars,” said General Motors’ Tim Nixon; “We have to make using these devices more safe.” Panelist Dr. Bryan Reimer agreed, saying, “We need to innovate, we need to move forward, and we need to figure out how not to leave the consumer in the past.”

Connectivity and the Car was sponsored by

Listen to Connectivity and the Car 2011
[MP3 format, right click/save-as]

Photos from Connectivity and the Car 2011 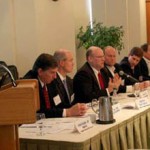