On a warm spring evening when no one’s thoughts were of the recent record snowfalls, NEMPA presented-among other awards-its Winter Car of 2011 trophies, which had been announced in February. The gala dinner, held this time at the MIT Faculty Club in Cambridge, Massachusetts, marked the 14th year that the New England Motor Press Association has handed out awards. Masters of ceremonies were former NEMPA president Craig Fitzgerald and Wayne Carini, host of Discovery Channel’s “Chasing Classic Cars.” NEMPA afterward thanked Carini with a $500 donation to his favorite charity, Autism Speaks.

Jeep’s Grand Cherokee was voted the top New England Winter Car for 2011. The class winners, which range from Suzuki to Mercedes-Benz, Ford to BMW and Hyundai to Porsche, are listed here. At the dinner, each winner received a handsome etched-glass plate to display back at headquarters.

NEMPA also honored convertibles at three price points. Mazda’s MX-5 Miata “is light, responsive, and tremendous fun to drive. It is also ultra-reliable and long-lasting, and-thanks to its hard or soft tops-all-weather functional. All this, plus good looks and a price that virtually any enthusiast can afford, makes the 2011 Miata the Everyone’s Favorite New England Summer Fun Ragtop.”

The Deluxe Summer Fun Ragtop Award went to the Nissan 370Z Roadster, which “embodies the spirit of the original Z-cars and adds new levels of power, handling, responsiveness and comfort, plus the convenience of a push-button top. The Z Roadster is one of the few cars that can make even a Boston commuter smile.”

Bentley’s Supersports Convertible took the Money is No Object Summer Fun Ragtop Award: “This fastest and quickest of all Bentleys puts a 621-horsepower engine into a rock-solid AWD chassis, and decorates everything with over-the-top wheels and graphics. Its astounding performance and agility for size remind us of Bentley’s potent racing heritage, and the luxurious cabin simply ices the cake. If you have to ask, you can’t afford it; if you can afford it, don’t ask-just do it.”

Jim Barisano of WheelsTV presented his company’s first Pre-Owned Vehicle of the Year Award, based on input from viewers, to the 2006-’09 Ford Fusion.

The 2011 Yankee Cup Technology award went to Volvo for its $2,100 Technology Package available on the S60 and many other models. Volvos so equipped are able to stop themselves before a collision with another vehicle or a pedestrian can occur. The awards jury noted that “Volvo’s Technology Package may be the single most cost-effective option available on a car today. Its purchase price will likely be earned back in avoiding even a minor fender-bender, while its potential for saving lives is priceless.”

For the first time, NEMPA invited MIT to help evaluate the nominees for the award. NEMPA’s awards jury noted, “As journalists, we can pick out automotive systems that offer special utility, but we relied on our relationship with the Massachusetts Institute of Technology to confirm the technical elegance and worth of our choices for the Yankee technology Cup.”

The evening closed with the presentation of a major new award that commemorates the late Gene Ritvo, a NEMPA member who passed away in 2010. The citation reads:

“Not a NEMPA meeting goes by without remembering Gene Ritvo, who could be counted on to close out each evening’s presentation with a complex and insightful question-which became known as ‘the Ritvo’-that would leave our guest blinking in mild panic and us nodding in appreciation. Gene Ritvo’s style, class and erudition made NEMPA look good, while his exquisite photographs of concours automobiles from Newport to Pebble Beach educated our senses.

“It is fitting then that we, his friends in the New England Motor Press Association and at the Newport Concours d’Elegance, honor Gene’s memory with the Ritvo Memorial Award for Design & Elegance.

“It is equally fitting that the first Ritvo Award go to Infiniti for its memorable marketing campaign called ‘The Way of Infiniti.’ Through a few well-chosen and powerful images and words, Infiniti evokes the inspiration, elegance, innovation and even emotion of its fine cars.”

The Ritvo Family stands with the Ritvo Award.

Each award was introduced by a combination of still photos and a video-and-voiceover lead-in prepared by WheelsTV under the leadership of NEMPA member George Kennedy. The awards dinner ended a day that began with NEMPA’s “Connectivity and the Car” roundtable, also at the MIT Faculty Club. More than 75 people attended each event, including automakers and PR people, members of the media, advocacy groups, and students and researchers. 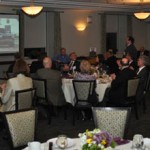