Subaru has had a good thing going with the Forester since it landed in the United States in 1998. It was a pioneering vehicle then, a small car-based SUV with all-wheel-drive that gave consumers an option just as the truck-based Ford Explorer was breaking new ground and establishing the sport-ute baseline.

Along with AWD, early Foresters featured a tall stance and an “SUV-tough, car-easy” mantra. The Forester was a spearhead of the compact-SUV movement that is now one of the industry’s most important segments.

“Those early Foresters were over-engineered and over-built,” Subaru’s Dominick Infante told NEMPA. “That’s why you still see so many of them on the road.” 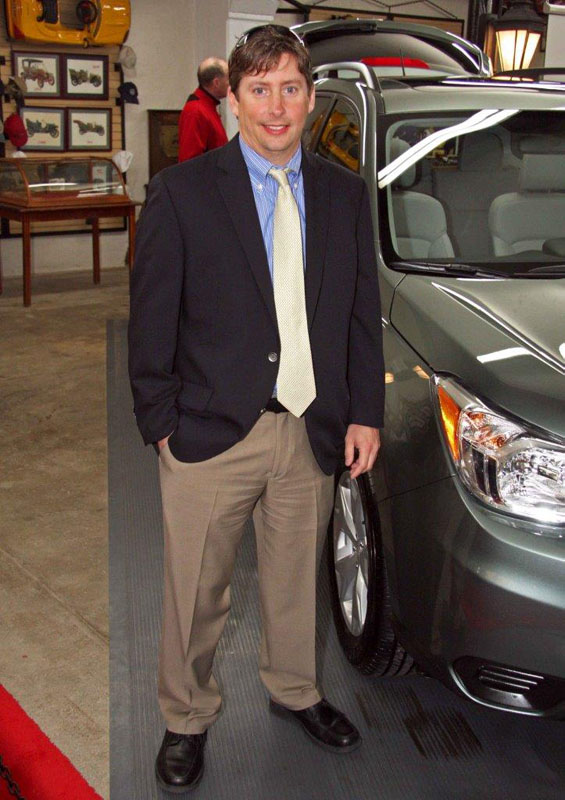 Subaru car line manager Todd Hill and communications executives Dominick Infante and Jessica Tullman traveled to the Automotion garage on April 11 to show off both the 2.5i and turbocharged 2.0XT Forester models.

Subaru car line manager Todd Hill and communications executives Infante and Jessica Tullman came to the Automotion garage in Middleboro, Massachusetts, on April 11 to show off the 2014 Forester, both the normally aspirated 2.5i and turbocharged 2.0XT models.

The recent rollout of this fourth-generation Forester has pushed sales to new heights, and these are good times for Subaru. “We’re coming off our best month ever in March,” Infante said, “and Forester sales never dropped off the way sales usually do during the phasing-out of a previous-generation model.”

For the first three months of 2013 Subaru has sold 16,874 Foresters, 25.3 percent of the company’s sales of 80,568 units in that period. While Subaru always has done well in the Northeast, Northwest and Colorado, its share of the overall US market has nearly doubled, from 1.2 percent to 2.3 percent.

“We’re continuing the momentum we built over the last five years. Even during the recession, we went against the trend and our sales grew,” Infante added; “right now our biggest problem is plant capacity.”

Subaru dealers also are feeling a bit pinched because relatively few used Subarus turn over. The company’s research shows that 71 percent of its cars are handed down within the original owner’s family.

Almost two dozen NEMPA members attended the evening presentation. Todd Hill told the group that the new Forester “kept its core values in the redesign—styling presence, drivability, fuel economy, and a turbo performance option all were part of the process.”

Fuel economy and improved cabin space (especially in the rear seat) are also likely to be significant factors in the new Forester’s sales performance. The Forester is a 5-passenger vehicle, and all five spots got attention in the redesign. 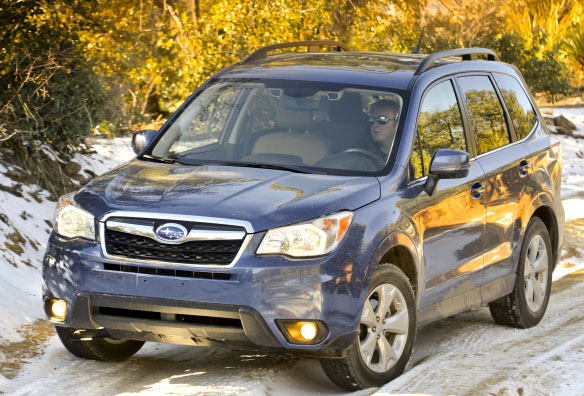 The 2014 Subaru Forester is significantly roomier and more comfortable than previous models, and also offers improved fuel economy, greater range and a host of new options such as EyeSight.

Up front, Subaru moved the A-pillar forward eight inches and the instrument panel ahead by nearly five inches. In addition, the seat hip point is 1.2 inches higher than before and there’s another 1.2 inches of additional shoulder room.  “It adds up to a much roomier feel,” said Hill. “In addition, the door sill is 1.5 inches lower, making it easier to get in and out. The Forester’s ground clearance remains at 8.7 inches.”

Rear-seat passengers get an extra 3.7 inches of leg room as well as more foot room under the front seats. For the benefit of a middle passenger in the back, the console between the front seats was shortened by 3.9 inches and the driveshaft tunnel was dropped 2.6 inches. For extra knee room in the second row, the backs of the front seats were scalloped out.

In turbo form, the Forester offers 250 horsepower and a CVT that can operate as both a 6-speed or an 8-speed with paddle shifters, depending on Si-Drive settings. The standard 2.5-liter engine is available with a 6-speed manual transmission or the continuously variable transmission. The Forester is now EPA-rated at 27 miles per gallon combined and 32 on the highway, which compares with competitors’ front-wheel-drive models. The boost in fuel economy gives the new Forester a 500-mile cruising range.