Marketing V-P Tony DiSalle presents the 2014 Buicks to NEMPA at the garage. More vehicles were waiting outside. (Photo: Zane Merva)

After drive-time—the keys had been left in a number of sample vehicles—and pizzas baked to order in a wood-fired oven, DiSalle and Saxman shared a number of important brand highlights:

•  To date, Buick has enjoyed 17 consecutive months of year-over-year sales increases. Overall sales are up by 13 percent so far for 2013, and 19 percent in greater Boston.

•  Equally or more significant is that Buick’s “conquest” sales—to buyers previously loyal to other brands—are up by 40 percent; and since 2008 the average age of Buick owners has dropped from 64 to 57—clear indication that Buick’s campaign to re-invent itself is paying off.

(DiSalle later added that he didn’t know of another deluxe or near-luxe brand that can make the same claim. He also admitted that this was a particularly difficult time for Detroit sports fans to travel to Boston, but that duty called.)

•  The Verano is currently Buick’s “oldest” model—which means that, taking mid-cycle updates into account, the entire Buick lineup of five vehicles has been overhauled, or at least refreshed, in just the past two years.

•  Enclave and LaCrosse mid-cycle revisions include new front and rear fascias as well as interior improvements.

•  The Encore subcompact CUV—described as “playing in a field without a lot of competition”—has become Buick’s top “magnet” vehicle, with a conquest rate of more than 50 percent. More than half of these Encore sales are to women.

DiSalle said that Buick now competes with the likes of certain Lexus and Infiniti models in the near-luxury segment, where the focus is delivering premium features at competitive prices. Buyers, DiSalle said, choose vehicles first for their styling and then for value. He added that “many luxury brands trade on a ‘too good to get in’ approach. That’s not very inviting. We want to be more human and more inviting—more approachable.”

Buick left several vehicles behind for the New England press fleet, so NEMPA members will have a chance to evaluate the 2014 updates first-hand. An AWD Regal GS will be in the running for Winter Car honors as well. 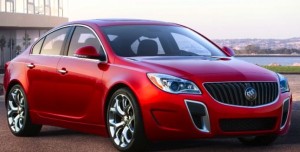 The 2014 Regal GS has a 2.0-liter turbocharged I4 rated for 259 horsepower and 295 lb-ft. FWD is standard ($36,905), AWD is available ($39,270). Interactive Drive Control offers Standard, Sport or GS modes that alter steering and suspension settings. About 12 percent of GS buyers order the 6-speed manual gearbox.