Infiniti showed off a pair of its high-tech new Q50 sedans at NEMPA’s Middleborough headquarters—aka the Automotion garage—on December 10. Members who slogged through an early storm from all over New England could have used the Q50’s “Snow” setting (among its multiple drive modes), but it was two other advanced features that created the buzz that evening.

Kyle Bazemore, Infiniti’s Senior Manager for US Communications, described in 10 minutes a system that took the company’s engineers some 10 years to develop: DAS, the Q50’s Direct Adaptive Steering. “Actually,” Bazemore said, “it was three years for the technology and seven years to get the feel of it just right.” 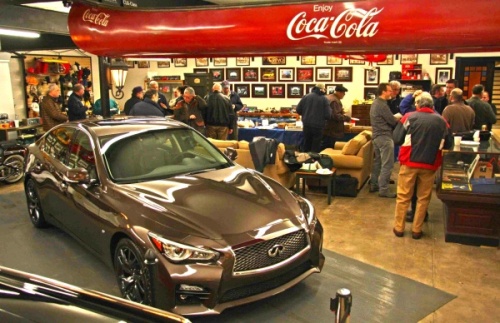 NEMPA members briefly turn their backs (pizza) to the Q50 in the Automotion gallery. Outside, in the fresh snow, a Q50 3.7 AWD was available for driving.

DAS is the first “steer by wire” system that operates with no mechanical connection between wheel and wheels, relying instead on two electric motors and a triple-redundant trio of electrical control units. “It only needs one ECU to function,” said Bazemore; “the other two are backups. And if the statistically impossible does happen and the electric steering totally fails, the car will default to manual steering—though it won’t be power assisted.”

Direct Adaptive Steering saves weight because it is bolted directly to the subframe without any dampers. And because it’s electronic, feedback from, say, rough pavement can be dialed out. “Of course, you can still get road feel through the suspension, but there’s less driver fatigue when it doesn’t come through the steering column too,” Bazemore said.

Q50 drivers can select Standard, Sport and Eco drive modes along with Snow and Custom (personalized) settings. Driving a Q50 on Middleborough’s back roads, a driver immediately noticed the system’s quick response, even in Standard mode.

The electric steering is tied into an Active Lane Control system as well as another Q50 innovation: PFCW, the world’s first Predictive Forward Collision Warning system. This uses radar to track not only the vehicle directly ahead, but also the relative velocity and distance of the vehicle in front of that one.

The system flashes and beeps if it detects the second vehicle ahead slowing suddenly; it acts more aggressively, and will apply braking, if the distance to the vehicle directly in front closes quickly.

Meanwhile, the Active Lane Control system uses the same cameras to make minute corrections to keep the Q50 in its lane. “We’re not talking an autonomous car here,” Bazemore said, “but these systems are building blocks in that direction.” 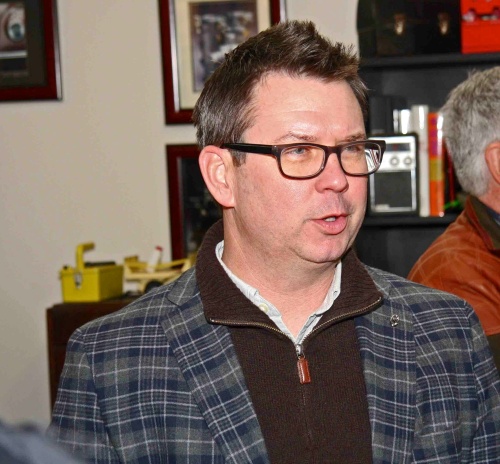 Kyle Bazemore, Infiniti’s Senior Manager for US Communications, at the Automotion garage on December 10.

Coincidentally, December 10 was the first anniversary of Infiniti’s radical decision to rename its vehicles, giving cars a “Q” prefix and designating SUVs and crossovers as “QX” models.

“Yes, this has caused some confusion,” said Bazemore. “But the decision wasn’t made lightly, and it goes back to our original flagship, the Q45, in 1989. It turns out that pretty much the rest of alphabet is already taken, but we had the rights to the letter Q.”

Because Infiniti vehicles also had numerical designations based on engine displacement, there were also questions of where new vehicles would stand in the brand hierarchy as engine sizes decrease in the quest for ever-better fuel efficiency.

“At first it was like being told you had to rename your children,” Bazemore said, “but we knew it had to be done to grow the brand in the long run. Now, with our new nomenclature, there’s plenty of room to add product from entry-level vehicles to a halo ultra-luxury car.”

Either event would be an occasion for a return visit. Meanwhile, one of Bazemore’s two sample Q50s, an AWD, has joined the NEMPA fleet as a 2014 Winter Car contender.