Jeep has been so active with NEMPA this year that Lisa (“Wheels”) Barrow—Fiat Chrysler Automobiles’ East Coast communications czarina—joked that she might have to find an apartment up here. Maybe it’s paying off. Jeep’s July sales in New England were up 51 percent over 2013, versus a mere 44 percent nationwide. And globally, according to Jim Morrison, head of Jeep product marketing, and Todd Goyer of Jeep brand communications, the company is on track to sell one million Jeeps in 2014. 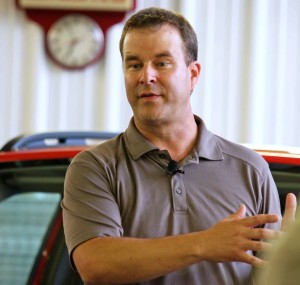 Barrow, Goyer and Morrison were at Automotion on August 12 to show almost two dozen NEMPA members the 2015 Renegade. (Brian Nielander, senior manager of design, had to stay behind. While a Jeep could have gotten him to the airport through Detroit’s torrential rains, dealing with the surprise swimming pool in his basement took pumps, shovels and mops.) The team also brought along a pair of 2015 Cherokees and a Grand Cherokee. 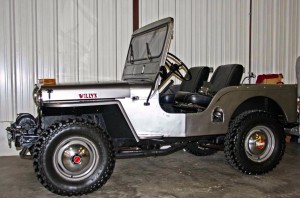 John Lawlor and the Automotion crew once again transformed the garage into a combination bistro-cum-boardroom. Jack Spinetto and Linda Smith, of Dave’s Diner, provided a wonderful barbecue meal topped off with apple pie or brownies à la mode. A surprise feast (for the eyes) came from Linda’s friend Gary Benson, Jeep restorer extraordinaire, who put the silver-gray 1951 Willys next to the buffet and the red ‘74 CJ5 outside in the parking lot.

Jim Morrison wasted no time pointing out the styling cues from the ’51 that have been carried forward to the Renegade, including the upright profile.

The Renegade, a brand-new player in the hot small SUV segment, is a significant launch as it looks to bring Jeep’s baked-in appeal and reputation for toughness to younger “active lifestyle” buyers.

The new vehicle is six inches shorter than the Patriot, but surprisingly roomy inside; Morrison called it “the smallest but still fully capable member of the Jeep family.” Renegades will come in four trim levels: Sport, Latitude, Limited and Trailhawk. The available Active Drive fully automatic 4X4 driveline can send up to 100 percent of engine torque to one wheel. “Instead of braking the other wheels and cutting power, our system can put full power to any single wheel,” Morrison said. 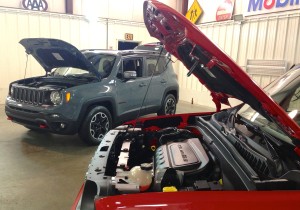 Renegade power comes from one of two four-cylinder engines, a 1.4-liter turbo or an unpressurized 2.4-liter. The red front tow hooks have become a Trailhawk signature element.

Engine choices are a pair of four-cylinders: a 1.4-liter MultiAir Turbo (160HP/184 lb-ft) mated to a six-speed manual gearbox and a 2.4-liter Tigershark (184HP/177 lb-ft) paired with the same nine-speed adaptive automatic that debuted in the new Cherokee. The former is a rare combo, a turbocharged 4X4 with a manual transmission, and the latter is the first small SUV with a nine-speed transmission. Both drivetrains promise better than 30 MPG on the highway. Contributing to fuel efficiency are a rear-axle disconnect, which lets 4X4 Renegades default to front-wheel drive as needed, and aerodynamic tweaks—a functional spoiler, belly pans, and air-deflecting tail lamps and spats around the wheel openings—that help the traditional Jeep “box” slide through the air.

Instead of a sun roof or soft top, the Renegade is available with a pair of oversize “My Sky” roof panels that unlatch and stow under the rear floor. 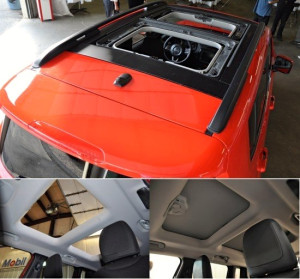 The two My Sky roof panels lift off and stow under the cargo bay.

The Trailhawk at the garage was in Anvil gray with charcoal cladding. According to Morrison, the color originated in a conference room: “Someone noticed a Rubbermaid wastebasket and commented that it would make a good Jeep color.” The red tow hooks have become a Trailhawk signature. “We could paint them flat black,” Morrison said, “but Jeep owners are proud of them and happy to flaunt their off-road heritage.” In homage to Jeep’s history, Renegade taillights and My Sky panels have X-shaped design features. Other Jeep touches include a seven-slot grille, large round headlights, flared fenders and trapezoidal wheel arches. Inside, the Renegade offers the latest in Jeep’s Uconnect technology, and a preview of future Jeep interiors. 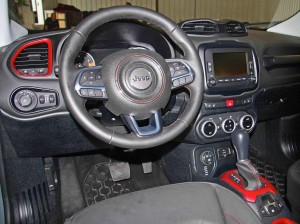 Morrison had to hedge about Renegade pricing: “I can tell you the base price will probably start with a ‘1,’ but if I say anything more, I may be looking for a new job.”

Renegades share some basic platform components with other FCA models and will be built at Melfi, in southern Italy. Sales should begin in Europe this fall and in the United States early in 2015. The two Renegades on display were working but non-drivable (by us, anyway) prototypes, but Jeep expects to have production examples in the NEMPA fleet in good time for the fierce Winter Car of New England competition. 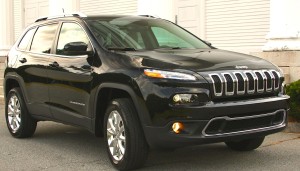 The Cherokee gains a stop-start feature and about one MPG in fuel economy. 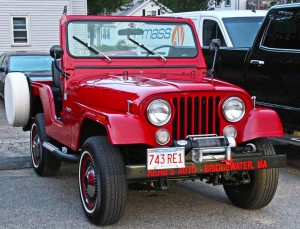 One Response to New Renegade to expand market for Jeep