December is reserved for Santa Claus at NEMPA’s annual Christmas party, but July is when we and our guests get to enjoy New England’s famous lobster claws. The occasion is always NEMPA’s time-honored summer driving and eating gala known as the Ragtop Ramble & Crustacean Crawl.

Seventeen summers and one hurricane cancellation ago, we inaugurated the Ragtop Ramble when a handful of cars and people left from The Boston Globe’s office and made its way northeast to an old-fashioned Maine shore dinner (lobster, clams, chicken, corn, potato salad, blueberry pie, lemonade, etc.) at the Colony Hotel in Kennebunkport. At this year’s gathering, on July 17, three dozen of the world’s most-wanted cars were doled out by lottery to more than 60 NEMPA members and guests from the auto industry, who then headed up to Maine again.

As always, the cars turned heads en route and in Kennebunkport, home of the Summer White House during the George H.W. Bush administration. There have been Bush family sightings at the Colony and on the Atlantic waters that are the backdrop for our gathering. Ramble newcomers are encouraged to drive the short loop from the hotel to see the Bush compound.

Over time, the Ramble starting point has changed, along with the cars (specialty non-convertibles are now allowed; thank you, Rolls-Royce, et. al) and some of the traditions. A few years ago, we added a Boston Harbor dinner cruise the evening before, and this time the rains cleared in time for us to enjoy a beautiful sunset on the water, as well as the color ceremony aboard the USS Constitution, aka Old Ironsides, at the Charlestown Navy Yard.

More recently, NEMPA instituted convertible awards that are based on members’ votes after each Ramble. Along with the Winter Car honors, these trophies are handed out at our annual awards dinner following the technology conference at MIT.

The Ramble starting point now is the fantastic Larz Anderson Auto Museum, in Brookline, where the cars are staged and Ramblers enjoy an all-American breakfast of Dunkin’ Donuts and coffee (and, for the cognoscenti, Kane’s Donuts from Saugus). Another new tradition was born in 2014, when our friends at Subaru brought in the famous Baja Taco Truck and Jessica Tullman renamed their breakfast offerings “Subarritos.”

Invaluable assistance this year came from Haartz, the international convertible top and interior supplier, as well as Hyundai, Land Rover, Jaguar and Volkswagen. As always, the Larz Anderson Auto Museum plays a huge role. Great thanks also go to the crew at Automotion, who manage the ever-more-complex logistics of the Ramble, and especially to John “Bugsy” Lawlor who contributes his people’s time and effort. 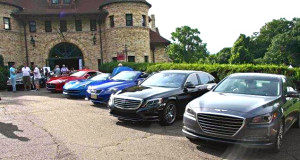 Early on Thursday morning, cars began to stage outside the main door at the Larz Anderson Auto Museum. 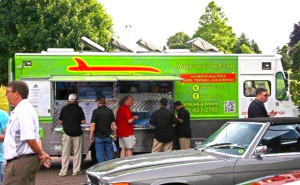 At LAAM, breakfast ‘Subarittos’ were furnished by Subaru and created by the locally famous Breakfast Burrito truck. 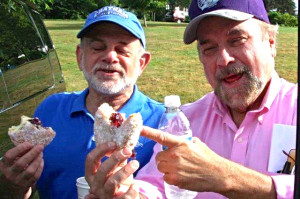 For the connoisseurs, a New England secret: Kane’s Donuts go with everything. 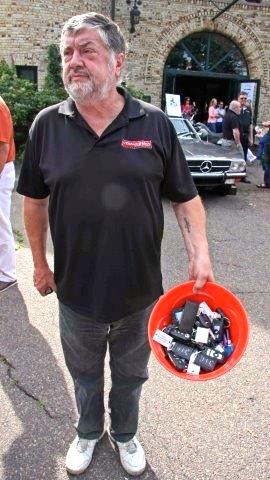 Automotion veteran Cliff Holman gathered the ignition keys in a bucket for the blind draw for cars. 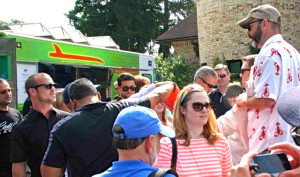 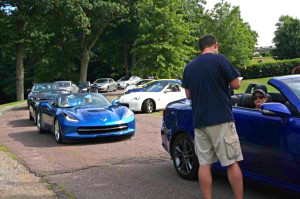 With keys drawn and drivers and passengers paired up, cars began to exit the museum en route to the rest stop on I-95 in southern New Hampshire. 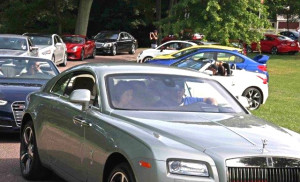 Sometimes it looked like Black Friday at the mall . . . a high-end mall. 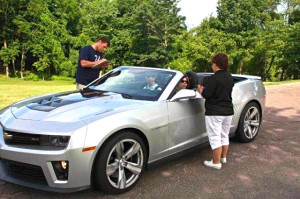 License and registration, please . . . To ensure nothing is left behind and no one skips the mid-drive swap, cars are checked out of LAAM and the NH rest area. 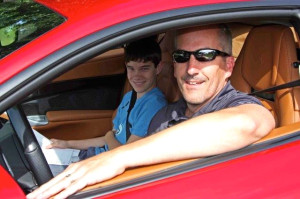 Audi’s John Schilling and son Owen managed to draw an F12berlinetta for the run to New Hampshire. 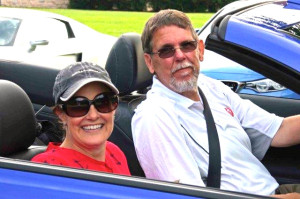 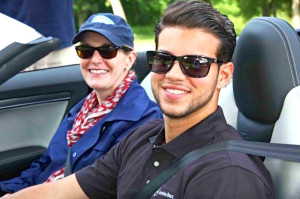 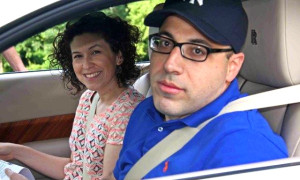 Steve Oldham (Nissan) and Alexandra Amelang (Infiniti) did the first leg in the Rolls-Royce Wraith. Why wasn’t he smiling? 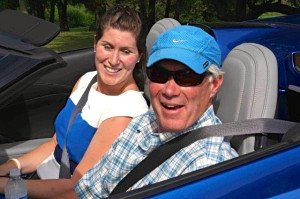 Tim Plouff (Ellsworth American, NEMPA) was very pleased to snag one of the Stingrays, plus Jessica Howell (Haartz) as his passenger. 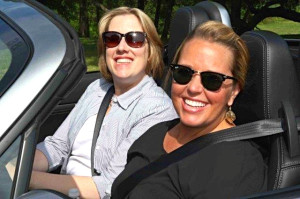 More smiles: GeekMom Nicole Wakelin (NEMPA, left) and Vanessa Cook (Ford/Capitol Direct) got some sun in one of the Mazda Miatas. 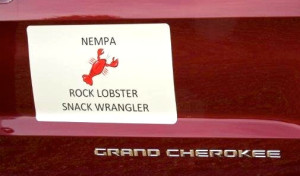 At the rest stop in New Hampshire there were snacks and cold drinks, courtesy of Chrysler’s Lisa Barrow and the ‘Snack Wrangler’ EcoDiesel Grand Cherokee she furnished as a support vehicle. 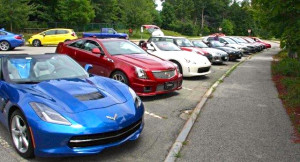 Early at the stop in New Hampshire, before the entire fleet arrived and tourists descended with their camera smartphones. 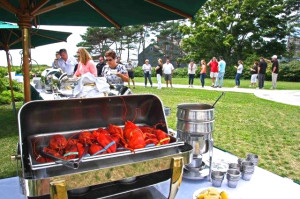 Newcomers proved quick learners, neatly polishing off their crustacea thanks to some technical tips from veteran New Englanders. The lobster steamer was bottomless. 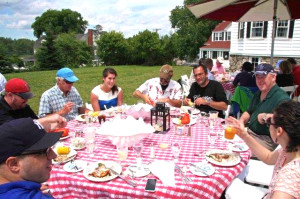 This year it was outdoor seating overlooking the harbor entrance and with a sea breeze to keep everyone comfortable. 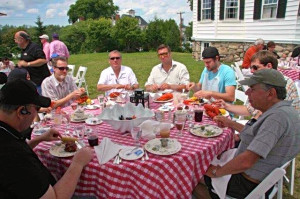 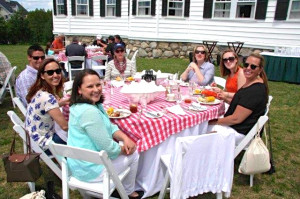 . . . and the girls’ table. Well, except for Zach Dollar, a man of good taste from the Boston Museum of Fine Arts. 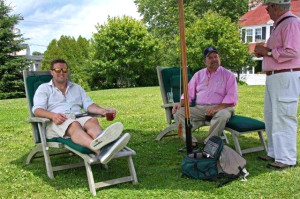 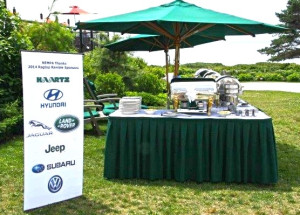 One Response to Weather clears for 17th Ragtop Ramble