MIDDLEBORO, MA—The canary-yellow taxi was sitting outside the Middleboro/Lakeville commuter rail station this raw and drizzly April night. It looked like it was hoping for a fare, but it was just being photographed by the media. A taxi? Well, yes—a brand-new Nissan taxicab, as adopted by New York. Sort of.
Nissan, you may recall, won a competition to select New York City’s Taxi of Tomorrow. The plan, by New York’s Taxi & Limousine Commission, was to create a unified look, style and standard for taxis, designed for three people and their luggage. With the honor came a 10-year exclusive contract to supply the city’s cabs.
With it also came lawsuits from competitors, and a judge finally nullified the contract over a technicality concerning hybrid drivetrains. As a result, NYC’s yellow cab fleet still has some 20 different kinds of vehicles in it. And Nissan, which supplies its NV200 for all sorts of commercial and passenger uses around the world, is trying to create more markets for its taxi version of the NV200.
We think it has a future. 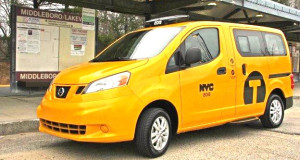 Evan Fulton, who worked on the NV200 cab for the past two years, told NEMPA that Nissan North America’s Taxi of Tomorrow was planned in Nashville, designed in San Diego and tested in Arizona, where the company built a road to simulate the hostile streets of the Big Apple, including potholes and curbs.
Not only did the resultant vehicle win the competition, but Nissan research also found that passengers tend to tip more in NV200s than they do in other cabs. (Evidently the cab makes both drivers and passengers happier.)
“We built this cab for the four groups that would have a stake in it—the drivers, passengers, owners and city residents,” Fulton said.
Drivers, who work eight- to 12-hour shifts, appreciate a modern, mid-sized van with a higher seating position in fully adjustable chairs covered in breathable fabric—plus Bluetooth, navigation, cruise control and steering-wheel controls.
Passengers enjoy a back seat with ample space and 43 inches of legroom—plus intercom, their own climate controls and a special background-noise blocker. There’s also a panoramic moonroof, and the side windows slide open for ventilation but not far enough for a person to squeeze through.
Power side steps help entry and egress, and the rear barn doors open wide for luggage. “Vacant” signs light up when the cab is available, and an icon indicates which sliding door is open.
Owners—those with one or more of the 13,600 New York City taxi medallions valued at about $1 million apiece—get a 150,000-mile warranty and 24 MPG, elements of Nissan’s competitive total cost of ownership package. (The average New York taxi runs 24/7 for about three years, during which time about 500,000 miles pile up on its odometer.)
Nissan even included city residents in the NV200 design. A single-note, low-volume horn was designed with late nights and early mornings in mind. When the driver sounds the horn, a ring of LEDs on the roof lights up, to single out the cab for a waiting passenger or alert other cabbies that the driver might be in trouble. 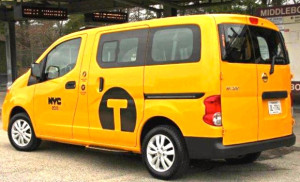 NV200 rear barn doors are extra-large for extra luggage. NEMPA members had fun driving, riding in and posing with Nissan’s Taxi of Tomorrow.

And finally, replacing 13,600 Ford Crown Victorias—New York’s previous default cab—with NV200s would have saved five acres of precious city space.
Fulton noted that “even if tomorrow never comes for these cabs, we still have a great market for these vans as ‘mom’s taxi’ ”—minus a meter and a credit-card reader. “Imagine a partition to separate you from the kids, an intercom you can shut off, and a PIM [passenger information screen] you can use to show videos.”
Maybe along with the Taxi of Tomorrow, the NV200 is also the Minivan of Tomorrow.