A small fleet of V-6 and V-8 2015 Genesis sedans rolled into the Automotion garage for introduction to NEMPA on May 14.

Story & photos by Bill Griffith, NEMPA
Hyundai’s Joe Guy Collier brought a mini-fleet of the company’s second-generation 2015 Genesis premium sedans to NEMPA headquarters on May 14. Brandon Ramirez, Hyundai senior group manager for product planning, capped off ride-and-drives through the Middleboro-Lakeville area with a PowerPoint presentation on the new vehicles.

Given the wide array of safety features in the Genesis, the evening was an apt lead-in to the May 29 NEMPA/MIT tech conference that will examine the topics of engineering safer cars and safer drivers.

Hyundai’s latest Genesis continues along the route of the original in offering loads of content at a lower price ($38,950 and up) than the competition. That competition is formidable, including the Lexus ES and GS sedans, Mercedes-Benz’s E-Class, the BMW 5-Series, Audi A6 and Cadillac CTS. Ramirez identified the Genesis target buyer as a driver who looks for a combination of style, function and price that provides both class and value. 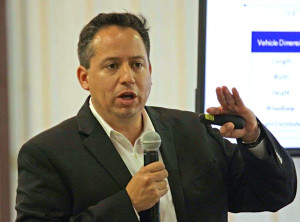 This Genesis is also the company’s first all-wheel-drive sedan. Hyundai says its HTRAC (Hyundai Traction) system delivers “the all-weather benefits of a traditional AWD, and the fun-to-drive character of a performance-oriented AWD system at the push of a button.” HTRAC is available only in the 3.8-liter, 311-horsepower V-6 Genesis. The 420HP V-8 Genesis is RWD only—for now. All Genesis models have eight-speed Shiftronic transmissions with paddle shifters and four-mode (Eco, Normal, Sport, Snow) Intelligent Drive.

Among the “Sensory Surround” safety and convenience features are lane-keeping assist (it vibrates the steering wheel), blind-spot detection, carbon monoxide cabin sensors (to fight driver drowsiness) and a driver-programmable head-up display. The Genesis also has automatic emergency braking that can prevent or mitigate crashes; it integrates the grille-mounted radar pickup and camera used in the smart cruise control and lane-departure systems.

An Intelligent Assistant smartphone app notifies owners that they might wish to get on the road early because of traffic problems, or accesses the remote start to crank up the climate control if it’s hot or cold out.

Hyundai is expanding its lineup with upscale vehicles such as the Genesis and Equus without creating a separate brand as Toyota (Lexus), Honda (Acura) and Nissan (Infiniti) have done. Hyundai cites the benefit of “halo” models in its single-brand stable, and the significant cost savings—which flow to the consumer—of not having to maintain separate dealerships. 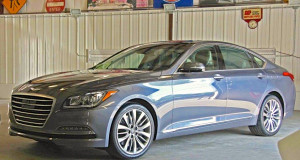 Hyundai calls its sedan styling, which debuted with the 2009 Sonata, Fluidic Sculpture 2.0. It gives the new Genesis a somewhat British look.

The 2015 Genesis is the first of three significant new vehicles for Hyundai. Next to come is the fuel cell-powered Tucson, which will debut on the West Coast but will be closely watched worldwide as an indicator of the public’s interest in hydrogen power. Also due out later this year is the 2015 Sonata, which should amp up the already high competition level in the mid-size sedan market.

Several Genesis models are now in the NEMPA fleet and will begin circulating among media members.