Ford’s three-cylinder, 1.0-liter EcoBoost motor develops 123 HP and 148 lb-ft of torque—and could fit in the overhead compartment of an airliner. 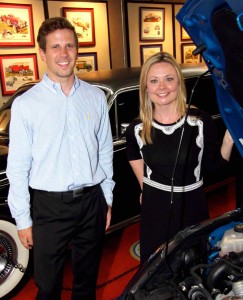 Ford’s Aaron Miller and Lisa Schoder in one of Automotion’s galleries.

The meal was, as usual, a gastronomic indulgence that Weight Watchers would consider a 1,000-point penalty night. (You’ve never had potato pizza? Delicious.) The chow might have kept a 12-cylinder exotic running wide open. The Ford Fiesta SFE (SE trim + FE for fuel economy), however, is aimed at energy efficiency first and price/value second, with a strong dose of fun-to-drive as a bonus.

The Fiesta SFE is also aimed at a car buyer who is willing to try something very nearly radical here in the land of the V-8: a three-cylinder engine of just one liter displacement.

Overseas, where it’s been available for some time, Ford’s “baby EcoBoost” was named an International Engine of the Year in 2012, 2013 and now 2014. Voters (87 motojournalists from 35 countries) were impressed by its output and efficiency—123 HP, 148 lb-ft—and the fact that it’s small enough to fit in the overhead bin of an airliner. 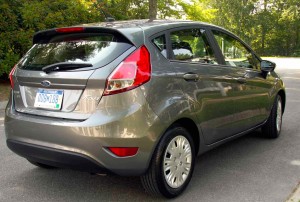 Variable valve timing, direct fuel injection and turbocharging make up for any lack of cubic inches, and driving the SFE around Middleborough demonstrated that the engine is plenty adequate when mated with a five-speed manual gearbox. In another highly unusual move for the US market, that’s the only available transmission—there’s no automatic. “Roughly 25 percent of Fiesta buyers opt for the manual anyway,” said Schoder. “Because price is so important in this segment, we bypassed the layer of cost that the automatic adds.”

Fiesta buyers will pay a $995 premium for the EcoBoost Three, which also brings with it aero wheels and a spoiler. Cook pointed out, “it’s the lowest price point for any of our EcoBoost engines. It’s a good way to show people what these engines can do.” 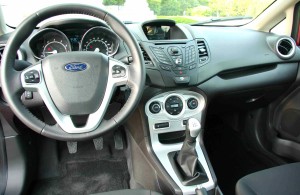 As its interior makes clear, the “baby EcoBoost” Fiesta is no econobox stripper.

“[This] EcoBoost is down on size but not on performance,” added Schoder. “It performs seamlessly and has great drivability. I think most people couldn’t tell the difference from a four-cylinder.”

That was the case, with only a minimal bit of engine shake when idling in neutral. “Instead of adding weight to balance the engine,” Schoder said, “the engineers created a unbalanced flywheel that results in a smooth-running powerplant.”

It’s noteworthy that a three-cylinder not only is being accepted, but also carries a price premium. However, it produces some other impressive numbers too: The Fiesta SFE is rated for 32 MPG in city driving, 45 on the highway and 37 in combined driving. These approach hybrid efficiencies, but at a much lower price.

“The sedan starts at $16,915 [including destination],” Schoder said, “and you add $500 for the hatchback. But it’s not a stripped econobox.” The SE is a middle trim level that includes MyFord Sync.

On the road, the Fiesta showed its European tuning with a firm ride and quick steering. The five-speed manual was forgiving, and around town the first three gears are all you need. Put your foot into the accelerator and you discover what Schoder called the Fiesta’s “small but mighty” personality. 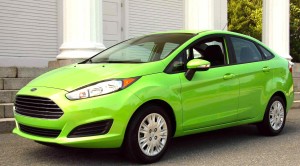 The 1.0-liter Fiesta SFE is available as a sedan as well.

The smallest EcoBoost is making its US debut in the Fiesta, but Ford plans to offer it in the Focus next year. And an automatic transmission? “It’s a really nice setup the way it is,” said Miller, “but that’s certainly under consideration too.”

Ford isn’t releasing sales projections for the SFE, but, according to Schoder, “so far, demand is exceeding expectations.” The Fiesta Three exceeded NEMPA members’ expectations too.