Three remarkable individuals and 17 outstanding vehicles were honored at NEMPA’s 2014 awards dinner, held after the technology conference at MIT.

At its annual awards dinner, held on May 29 at the MIT Media Lab and sponsored by AAA of Southern New England, Chrysler and Nissan, NEMPA honored three remarkable individuals for their contributions to the automotive industry and awarded trophies to 17 outstanding vehicles. Wayne Carini, host of Velocity TV’s long-running Chasing Classic Cars, once again emceed the dinner.

“Our awards presentation is always a treat because it truly encapsulates what New England drivers are all about: Persevering through winter, squeezing every bit of enjoyment out of the summer, and making the most of new technology,” said NEMPA President Craig Fitzgerald. “Throw in the great honor of presenting awards to people such John Davis, Paul Parravano and Lori Scholz, and it makes for a really memorable evening.” 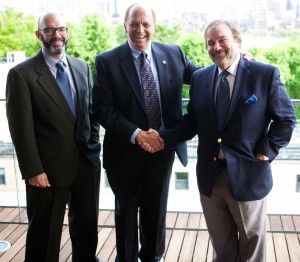 As creator, host and senior executive of MotorWeek, television’s original and longest-running automotive series, now in its 33rd season, John Davis can be seen and heard throughout the US on PBS broadcast and the Velocity cable networks. Davis is also an automotive commentator sought by CNN, Weekend Today and other media, and he often addresses auto executives, consumer and student groups, and car enthusiasts—as well as state and federal government agencies.

John Davis is one of the founders of the North American Car & Truck of
The Year Awards, an organizer and founding member of the Washington Automotive Press Association and a former president of the International Motor Press Association.

More to the point, at least for NEMPA, is that John Davis is a stellar example of journalistic integrity and living proof that conveying information to those who enjoy cars can be a viable, indeed honorable profession.

NEMPA’s Camel’s Back Award is presented to a member of the automotive public-relations corps who has consistently and with good humor and genuine helpfulness risen to our often untimely and burdensome requests, rather than allowing them to be the proverbial “straw that broke the camel’s back.”

The New England Motor Press Association’s 2014 Camel’s Back Award goes to Lori Scholz, a consummate public-relations and communications professional, for her years of work on behalf of both Hyundai Motor America and motor journalists everywhere.

Lori Scholtz joined Hyundai Motor America’s Public Relations Department in April 2004 as an administrator in corporate communications and was soon promoted to Manager, Public Relations, a position she has held now for 10 years. She oversees Hyundai’s US press fleet and helps plan vehicle launches and Hyundai’s participation in regional events and auto shows. Lori Scholz lives in southern California, but she is a member of automotive press associations across the country, and it is her cheerful and generous support of these groups that has earned her this recognition from NEMPA.

Presented to an individual who has emulated the enterprise, collegiality, helpfulness, integrity and good will that marked the career of Charlie Dole, for many years the automotive columnist for The Christian Science Monitor and dean of the New England automotive press corps.

Parravano has degrees from Harvard and Northeastern University Law, and in his free time he serves as Chair of the boards of both the National Braille Press and the Housing Corporation of Arlington (MA). For many years, Parravano has been a friend of the Car Talk staff, at NPR, and it was Paul who brought NEMPA and MIT together on what has become an annual automotive technology conference and a collaboration in awarding the Yankee Cup for automotive technology.

The Yankee Cup is presented to an automotive feature or system that significantly enhances the motoring experience, whether by making driving safer, more cost-efficient or simply more enjoyable. The winner is selected with input from MIT engineering faculty.

In 2014, for the first time the Yankee Cup goes to an entire vehicle, the all-new 2015 Ford F-150 pickup truck. “When reviewing the entries for the Yankee Cup, we couldn’t help but notice the F-150 is loaded with innovation,” said Craig Fitzgerald, New England Motor Press Association president. “We all know this vehicle is Built Ford Tough, but now it is both tough and smart—helping to redefine the light-duty pickup for the next generation.” Ford has filed more than 100 patents on the all-new Ford F-150, making it the most patented truck in company history.

The Ford Mustang has been an icon since its debut a half-century ago. Although it is now older than most NEMPA members, recent Mustangs have reached new heights in performance and in quality, while—with the EcoBoost engine—also helping usher in a new era of environmental responsibility. Drop the top on the convertible and you’ll see why the Mustang earned this award.

On its 1989 debut, the Miata instantly was recognized as the reincarnation of the classic sports roadster. Since then, this Mazda has become one of the most recognized and coveted of cars. It is light, responsive and great fun. It is also ultra-reliable and, thanks to hard or soft tops, all-weather functional. All this plus good looks and a price that every enthusiast can afford makes the 25-years-young Miata NEMPA’s Best Affordable Convertible for 2014.

In the only back-to-back wins to date, NEMPA members this year picked different versions of the Porsche 911 as 2014’s Best Luxury Convertible and 2014’s Best All-Weather Premium Sports Car. Either way, with a folding top and/or AWD, the 911 is simply one of the best cars of all time, offering power, performance, sophistication and prestige in a package that is both New England winter-capable and summer fun-worthy.

The Annual Winter Car Awards
After months of driving dozens of contenders, the voting members of the New England Motor Press Association selected their top winter rides, the vehicles that offer the best combination of winter-specific features and options plus the dynamic qualities that make for safe, enjoyable and competent all-weather driving.

And what a winter it was, with snow on the ground from before Thanksgiving well into April in much of New England. “These are the times that try men’s souls,” NEMPA President Craig Fitzgerald said, “and also test our ability to get up the driveway.”

As always, one contender rises to the top as the official Winter Vehicle of New England, and other worthy vehicles earn Best in Class honors:

The Grand Cherokee has now taken the overall Winter Vehicle honor every year since 2011. This unprecedented fourth consecutive win is due to the EcoDiesel engine and the eight-speed transmission, new features that put the big Jeep at the top of both the power-with-efficiency and value curves. As well, the Grand Cherokee continues to manage New England’s snow and ice with highly competent handling and traction, an excellent ride and a comfortable, tasteful interior with proper cold-weather amenities. Wherever it goes and whatever its assignment, the Jeep Grand Cherokee stands out in the crowded SUV and crossover segments.

The Cadillac XTS and the Infiniti Q50 share similar qualities and specifications. Each car makes winter-thrashing all-wheel-drive available with powerful six-cylinder engines and two levels of luxury, both featuring leading-edge technology. The XTS and the Q50 speak entirely different, yet equally eye-catching and sophisticated design “languages,” and both are fine places to inhabit, whether on the open road or stuck in traffic.

Longer, wider and sleeker than the beloved 3-Series coupe, this latest iteration of “the ultimate driving machine” offers everything BMW is known for: Superb handling and balance, a silky-smooth high-output engine, a sporting eight-speed transmission and a highly functional cabin. To this, add 30-MPG efficiency at high speed even with all-wheel drive. The new 4-Series xDrive points toward ever more evolved and sophisticated winter-fighters.

Subarus ply our roads because this maker seems to know exactly what appeals to the thrifty (and hardy) souls who live in New England. The Legacy is a multi-functional, exceptionally safe and capable AWD vehicle that remains affordable to own and operate. All-wheel drive has been a Subaru hallmark since 1972, and the 2014 Legacy continues to keep Subaru owners on the go through any weather.

New England enthusiasts say it’s hard to beat the latest interpretation of the WRX, especially in low-traction conditions. The WRX’s interior has been upgraded; both the ride and the handling reach far higher than the relatively modest sticker price would suggest; and the 2.0-liter turbo Four will put a smile on any WRX driver’s face. And then there’s the even higher-output WRX STI, also with Symmetrical AWD.

NEMPA members continue to pick the Porsche 911 as one of the best cars ever; and the six different all-wheel-drive 911 Carrera 4 models offer the same power, performance and prestige in a package that is New England winter-capable. More than perhaps any other car, the 911C4 proves the point that a car with stellar handling and performance in the dry has an automatic advantage on snow and ice—sufficient grip provided, of course.

The premium Silverado High Country 4WD Crew combines the cabin space, comforts and features of a luxury sedan with the ability to perform (and get to) almost any heavy-duty job. The Silverado can put in a full day at the worksite and then, after a detour through the car wash, grace the best nightspots. Got a date? Make a parking valet’s evening—drive the Silverado to your favorite restaurant tonight.

Once known only as value leaders, the Santa Fe and the Sorento share many of the same qualities that put them ahead of their competitors in the 2014 Winter Car competition. Both are “right-sized,” with comfortable seating for five, and boast high levels of standard equipment, as well as ample power and winter-taming all-wheel drive. It’s easy to see how and why this duo split their class ticket among NEMPA voters.

A refined interior, a choice of smooth four- or six-cylinder engines or a hybrid drivetrain, all-wheel drive and comfortable accommodations for up to eight, all wrapped up in Toyota’s typical belt-and-suspenders engineering—this is the 2014 Highlander. Few mid-size crossovers can compete with the Highlander in this price class, and New Englanders like to say that a Highlander will outlast even mud season.

The MDX is an unusually agile driver’s crossover ute that hasn’t forgotten the passengers or cargo. The MDX offers excellent AWD handling and 290 horsepower, yet thanks to significant weight loss and rigorous attention to engineering, it achieves outstanding fuel economy too. NEMPA was also impressed with the MDX’s deluxe cabin and its extensive technology suite. The Acura MDX is swift, smooth, quiet and very competent.

The 2014 Range Rover Sport is one of those rare vehicles that seems to defy the laws of physics, with the capabilities to handle almost any on- and off-road situation, no matter the weather. All by itself, one Range Rover Sport can free up the other four slots in a five-car garage, since there’s no more need for the sports sedan, the luxury limo, the enclosed all-terrain vehicle for five or the everyday errand-runner.