Bill Griffith, NEMPA
Photos by Lisa Fleming Brock, NEMPA
The Ford pickup represents an internal-combustion dynasty. The various F-series have been our best-selling truck for 37 years and North America’s best-selling vehicles overall for 32 straight years. It’s an unparalleled success story, one that Ford takes very seriously as production of the ground-breaking 2015 F-150 is set to begin soon.

Ford’s new crown prince has now earned one significant award already: The Yankee Cup, presented each year by NEMPA, with input from MIT’s automotive engineering faculty, to a “feature or system that significantly enhances the motoring experience, whether by making driving safer, more cost-efficient or simply more enjoyable.” For the first time, the Yankee Cup has been awarded to an entire vehicle—and a truck, at that: the 2015 Ford F-150 pickup.

Ford kicked off the fourth annual NEMPA-MIT technology conference, held at the university’s spectacular Media Lab on May 29, when F-150 chief engineer Pete Reyes spoke at the opening lunch.

“It’s an honor to accept this award on behalf of the team behind the all-new Ford F-150,” Reyes told the crowd. “With the 2015 F-150, Ford is teaching the world how to build a next-generation truck, and the more than 100 patents the F-150 team has filed for technologies prove these Ford engineers and designers are innovative leaders in the automotive industry.”

Reyes told the audience that, even as the 12th generation of the F-150 was introduced, in 2009, Ford was already looking to the future as competitors such as the Silverado and the Ram were stepping up their challenge to Ford’s truck supremacy. The hierarchy in Dearborn decided that their next truck would be literally all-new, from the ground up. Derrick Kuzak, then Ford’s group vice-president of global product development, commissioned a series of research studies.

“It was an amazing analysis,” Reyes said. “They were at it for a year and a half. They could input any number of parameters into the simulations, studying all the configurations and marketing possibilities.”

No matter how the researchers asked their questions or analyzed their data, one result always remained the same: “Our customers wanted to keep the F-150 the same size. Shrinking it was not an option for us.”

“Our owners [also] told us not to mess with the cargo box,” Reyes said. They didn’t want built-in compartments, but preferred the straight sides of a normal 4×6½– or 4×8-foot box.

Another proposed change, reducing the truck’s weight 100 to 250 pounds by lightening doors, the front end and tailgate, made no significant impression on customers or projected sales. However, cutting weight by a big number—700 pounds, say—made a significant difference in the projection, and to engineers and marketers. 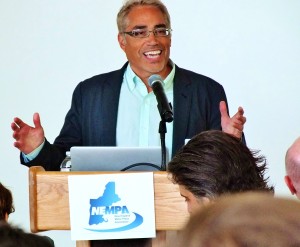 “[Dropping that much weight] meant we’d be able to make the truck better in all ways,” said Reyes. “We could reinvest that weight savings in increased towing capacity, better steering, braking, acceleration, handling . . . in every measurable way.” The only way to accomplish such an unprecedented improvement was by switching to higher-strength steel in the frame and using military-grade, heat-toughened aluminum for the body and bed.

Such a dramatic change in a major product entails major risk. (Think of Coca-Cola changing its formula.) Still, when the planning group brought its proposal to Ford CEO Alan Mulally, his response was: “What took you so long?”

Before joining Ford, in 2006, Mulally had spent almost 40 years as an engineer and executive at Boeing, and had extensive experience with aluminum—as did Ford people who’d worked with aluminum Jaguar and Land Rover bodies when Ford owned those companies.

The decision to proceed with aluminum had to be made early (back in 2010) because, as Reyes noted, “Where do you go to get millions of pounds of aluminum every year?” New sources had to come on-line.

Aluminum may be the biggest single change in the 2015 truck, but it was hardly the only improvement. Inside and out, the new F-150 has many innovations.

Reyes pointed to new single-bulb LED headlight/reflector units, the first such in a pickup, that are meant to be virtually unbreakable and to last more than five times longer than conventional lights. (They will be manufactured by Osram in Hillsboro, New Hampshire.) There are also LED spots under the side mirrors, to light up the sides of the truck, and LED lights under the bed rails—especially helpful on trucks with tonneau covers.

The driver will be able to lower the tailgate remotely by a button on the key fob, and the pioneering tailgate step has been better integrated and made more useable. The driver will get a 360-degree surround camera, blind-spot and cross-traffic alerts, park assist and 400-watt power outlets in the cab. The interiors have been upgraded and extended-cab models get inflatable rear seatbelts.

The bed has a snap-in adjustable BoxLink cleat system, for tying down cargo, and ramps that stow on the sides of the box are available for motorcycles, ATVs, lawn tractors and the like. F-150 designers also added reinforcing plates inside the cargo-box walls, for owners who need to drill into them. And if Ford couldn’t think of every possible add-on, they knew who could. “We’re saying ‘Bring it on!’ to the aftermarket community,” said Reyes.

With four engine choices, including two EcoBoost models, “we crunched the numbers and came up with something like 58,000 different ordering combinations for the new F-150,” Reyes said. It seems likely that someone will buy at least one of each; more than 33 million F-Series pickups have been sold since the truck was introduced in 1948.