Brand manager J.T. Delcamp, Kathy Graham of Chrysler communications and East Coast PR manager Lisa Barrow visited the Automotion garage on June 10 with the message that Chrysler is determined to be a serious player in midsize sedans. As proof, they brought a quartet of the completely redesigned and re-engineered Chrysler 200s, which share a modular platform with the Alfa Romeo Giulietta.

In May, they told NEMPA, the Chrysler Group celebrated 50 consecutive month-over-month sales increases. Much of the credit goes to Jeep, but the Chrysler 200 should begin to contribute to this too, as the last of the old cars clear out and these 2015 models come on line. According to J.T. and Kathy, the outgoing 200 suffered from a perception that it wasn’t truly a midsize sedan, nor was it as refined as its competitors.

NEMPA members who drove the new cars agreed that the 200 has come a long way, with significant improvements in handling, performance, structural stiffness, comfort and quiet, and that it should no longer be overshadowed by its larger stablemate, the Chrysler 300. 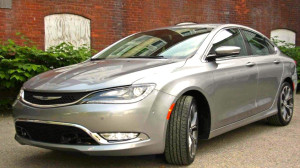 The grille and elongated Chrysler logo, with a light pipe around the headlights and LED fog lights (and taillights), are “the new face of Chrysler.”

The new 200’s steering and suspension systems are taut and responsive with either the 2.4-liter, 184 HP Tigershark I-4 engine or the 3.6-liter, 295HP Pentastar V-6. Both engines are mated to a smooth nine-speed automatic transmission that can change its shift map on the fly. The four-cylinder 200 is rated for 36 MPG on the highway and the Six at 32 MPG. The entry-level LX and second-level Limited are projected to be the sales leaders, and 85 percent of 200 sales are expected to be four-cylinders.

Good news for New Englanders is that all-wheel drive will be available with the V-6 on the upscale 200C and sporty 200S. The AWD system is unique among midsize sedans in that the rear axle disconnects when it’s not needed, to reduce power- and fuel-robbing friction. According to Delcamp, “Driving events activate the AWD, among them turning on the windshield wipers, hitting an 11-percent grade or encountering temperatures below 37 degrees,” along with changes in the road surface. 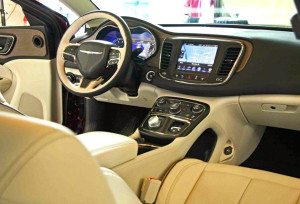 (That transmission selector knob also opens up the center console to reveal a deep storage area beneath—with USB and 110-volt power sources—that can also be accessed by rear-seat passengers.)

New technology abounds in the 200, including but hardly limited to: SafeHold, which sets the emergency brake if the driver opens the door and unbuckles the seatbelt after accidentally leaving the transmission in gear.  Available ACC-plus (Adaptive Cruise Control-plus), which can bring the car to a full stop in certain circumstances. Available Forward Collision Warning-plus that can stop the car at speeds up to 15 MPH and provides braking assistance at higher speeds. Parallel and perpendicular Parksense assistance is also available. 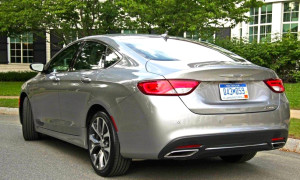 To build the new 200, Chrysler gave its Sterling Heights, Michigan, assembly plant a billion-dollar makeover with the latest in energy-efficient, low-noise conveyor systems, laser-guided robotic body assembly and Braun-lighting paint processes. Among the benefits are more precise panel fit and better, greener painting. Ninety-seven percent of the residue from the new primer powder coating is recovered for re-use.

The evening’s presentation positioned the 200 well for its coming battle in a crowded and tough market niche. “The industry sells 2.3 million midsize sedans every year,” said Graham. “That’s roughly one in every six vehicles sold in this country. And there isn’t a bad car in the segment.”

The new 200 comes to market just after Chrysler Group chairman and CEO Sergio Marchionne outlined the future course of Chrysler and Dodge: Chrysler will be the mainstream brand and Dodge the performance-oriented nameplate.