NEMPA became the first group of American journalists to drive Ford’s brand-new Focus ST and Fiesta ST models back-to-back at a preview on June 20 at the Automotion garage in Middleborough.

The two FWD hot-hatch STs are the latest products from Ford’s SVT group. (“ST” stands for Sport Technologies.) They are for the driver who puts performance first—and for the enthusiasts who for years asked why we in America couldn’t get the vehicles Ford was selling so successfully in Europe.

The Focus ST is a 5-door, approximately 3,200-lb hatchback with a 2.0-liter 4-cylinder EcoBoost engine tuned for 252 horsepower and 270 lb-ft of torque, and it is available only with a 6-speed manual gearbox. Leave it in the drier a bit too long and out comes the Fiesta ST—2,800 pounds, 197 HP and 202 torques, also a 6-speed manual box and the same (or more) attitude. Suspension-wise, both cars have been lowered, stiffened, dampened and generally sharpened up. They have torque-vectoring and bigger, stickier rubber. Neither one is what you’d call a mainstream vehicle.

It only took NEMPA veteran Silvio Calabi two minutes at the wheel of the Focus ST3 to become a believer. “It’s Ford’s answer to the VW GTI,” he said. “It’s quick, it’s crisp and it’s even classy. Why can’t Boeing and Airbus puts seats like these in a $100 million airplane?”

We found the transmission and clutch to be neatly mated to the engine, with the driver able to get a satisfying and sustained pull in any of the lower five gears, with enough torque steer to make an impression. Ford engineers chose a 6th gear that’s “long” enough to return 32 miles per gallon in highway driving. As a result, the Focus ST is rated at 26 MPG overall and 23 in the city. (The Fiesta ST is rated for 26/35 city/highway MPG.)

The hot Focus has a wonderful exhaust note that gets ever-raspier as the revs rise; however, it doesn’t bother innocent bystanders because of a “sound symposer”—a tube running off the intake manifold with a valve that opens at 3,000 RPM to deliver the robust tone into the cabin.

“Not all noise is bad,” Ford marketing exec Mike Murphy reminded us. “We go to great lengths to cancel NVH—noise, vibration and harshness—and then work on tuning exhaust notes and stereo systems.”

Along with the ST chassis, the sport-tuned electric steering is also set up to maximize driving dynamics. Both Focus and Fiesta STs are easy to maneuver, but the variable-ratio steering has good feel on twisty roads as well as the straight-line stability of old-time manual steering on the interstate.

The Fiesta ST has an MSRP of $22,195 (including destination) with one Recaro package option ($1,995) that offers heated, partial-leather seats and heated mirrors.

There can be a bit of price overlap between Focus and Fiesta ST, and SVT engineer Tim Smith likened the two cars to brothers:

“The Focus is more refined, while the Fiesta has a raspier tone and is geared for a younger demo. The Focus might be faster in a straight line from zero to 60, but the Fiesta would be quicker over an autocross course.”

This is the 7th generation of the Fiesta since it was launched in the late ‘70s, but it’s the first one that hasn’t been “dumbed down” for the American market. According to Smith, “This Fiesta has minor tweaks necessary for the US [the American 5-door Fiesta weighs 130 lbs more than the Euro 3-door version, so it needed slight mods to compensate], but it’s been tuned so the driving dynamics are exactly the same as the European version.”

Smith expects ST buyers to be attracted by the cars’ performance, build quality and looks, and also by their rarity:

“The ST customer wants something special and it’s important to him—or her—that each car is on the lightest platform for that vehicle, and with the highest-output EcoBoost engine. But they’ll also appreciate that there will only be four to five thousand built each year.”

NEMPA’s opportunity to meet the athletic ST “brothers” came on the eve of a public ride-and-drive event at Foxboro’s Gillette Stadium—the kickoff of a 13-city, summer-long Ford caravan that features current products such as the Escape, the Fusion and the CMax and Fusion hybrids, along with the two hot STs. 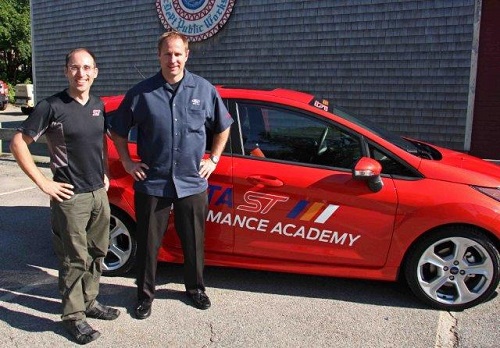 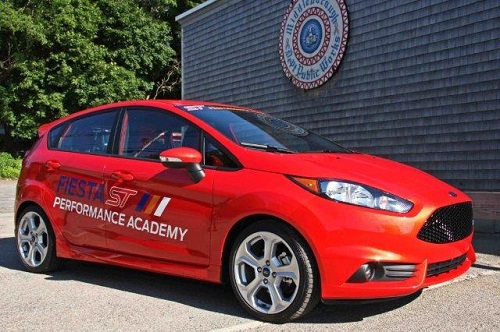 The Fiesta ST also gets a unique interior, with special pedals and shifter along with darker materials on the pillars and headliner. But the most obvious ST tipoff will be colors such as Tangerine Scream, Race Red, Performance Blue, Green Envy and this Molten Orange Metallic. 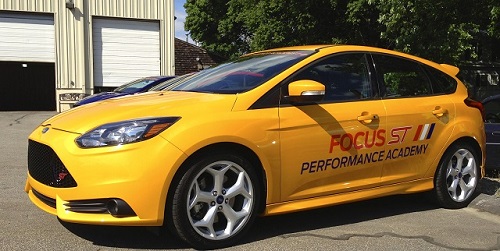 The Focus ST stands apart with a one-piece, all-black version of Ford’s new grille, plus diffuser-style vents, sculpted side skirts and special wheels. This is the loaded ST3 package in “Tangerine Scream.”