These are good times at Chevrolet, which now accounts for more than 50 percent of all General Motors’ sales; sales of compact, small and mini Chevy models (i.e., Cruze, Sonic, Spark) are up 265 percent since January 2010; and GM claims that Chevrolet is the No. 2 choice among under-25 buyers. 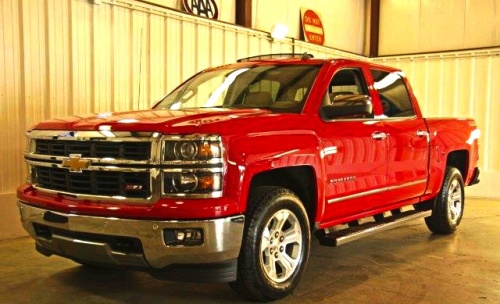 The Silverado, said Mike Norrito, is Chevrolet’s No. 1 nameplate, currently accounting for 24.3 percent of sales, and it defines the company just as much as the Corvette and Camaro do. Nationwide, pickup-truck sales have rebounded from a low of 1.1 million units in 2009 to 1.66 million in 2012, and pickups are now the fourth-largest segment, making up 11.2 percent of all vehicle sales.

“The average truck on the road now is more than 11 years old,” Norrito said. “That indicates there’s tremendous pent-up demand. Also, the new-truck buyer is trending towards the crew-cab models, making it a multipurpose purchase—working truck by day and family vehicle at night.” Crew cabs, Norrito added, were zero percent of the market in 2001, but accounted for more than 60 percent of sales in 2012.

Coming soon is a premium High Country Silverado, built to cash in on the fact that 30 percent of pickups now sell for more than $40,000.

If attention to detail is an indication of engineering excellence, three improvements to the Silverado’s box may be telling: A footstep in the bumper and corresponding handhold in the rail, to make climbing into the bed easier; the easy-up, easy-down, “no bang” tailgate; and LED lighting under the bed rail—great at night, and indispensable with a tonneau cover. 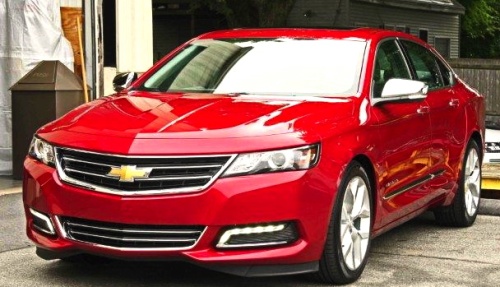 The Impala nameplate dates back to 1958, and Chevy has sold 16 million examples since then. Marketing manager Jon Hahn reported that early sales of this 10th-generation version are encouraging.

The Impala’s available 305HP V-6 is said to be the segment leader in power, but buyers might be even more intrigued by its 29 highway MPG rating. Alternatively, the 2.5-liter direct-injection 4-cylinder makes 196 horsepower and has a 31 MPG highway rating. Coming soon is a 2.4-liter 4-cylinder with GM’s eAssist light hybrid system that’s projected to deliver 25 MPG in city driving and 35 on the highway.

This is in addition to a nicely appointed, almost limousine-size cabin and a full array of standard and optional tech features. Hahn described the Impala’s 18.8 cubic-foot trunk as “four sets of golf clubs-sized.” The Impala appears much improved and should be a worthy rival to the Avalon, the Azera and Cadenza, the Charger, LaCrosse, Taurus and Chrysler 300. 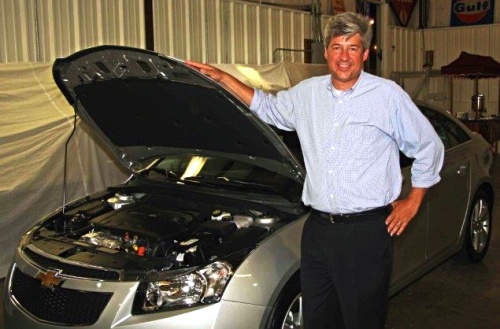 Cruze program engineer Jim Dimond spoke of diesel’s real-world performance and economy advantages, and quoted auto-industry think tank LMC Automotive: “The market for diesel cars in the United States is small at present, but it is expected to grow due to CAFE requirements and expected increases in gas prices. So far, the German automakers haven’t had any diesel car competition in North America. GM could do well with [the Cruze], particularly with younger buyers who don’t have the old prejudices against diesel.”

The Cruze is the only diesel-powered domestically built passenger car, and it is aimed directly at VW’s Jetta. Compared to the Jetta, the Cruze has a higher MPG rating and 11 more horsepower, but a slightly lower MSRP ($25,695).

The 2.5-liter turbodiesel engine produces 140 HP and 258 lb-ft of torque, and the Cruze earned mileage ratings of 27/46 city/highway. Diamond added, “any number of us who’ve worked on the project have had no problem in topping the 50 MPG mark when we take the car for a weekend.” The car has a range of 717 miles per tank of fuel. (Try that without a pit stop.)

In adapting the Cruze to a diesel powerplant, GM worked with engineers in Torino, Italy, to reduce NVH (noise, vibration, harshness). As a result, while you can hear diesel “clatter” when standing alongside the idling car, the interior is quiet, and it’s easy to conduct a normal conversation even at highway speeds. Particulate filters and diesel emission fluid injection systems enable the Cruze to meet stringent air-quality standards.