North Dighton, MA—Visiting Manheim New England’s auto-auction facility during a sale has the feel of being at the track for a big stakes race.

On June 3, Manheim brought NEMPA members behind the scenes at one of the company’s Tuesday auctions to see how the business works. The racetrack comparison turns out to be apt. Manheim’s 250-acre venue once was the site of the Taunton dog track; Manheim took it over in 1981, but there’s the same palpable air of electricity and anticipation that you find at the track, and for the same reason: Many dollars are bet on picking winners, be they dogs, horses or horsepower. At Manheim, the “bettors” are virtually all dealers who buy in quantity; there’s little resemblance to the glamorous collector-car auctions seen on cable TV. 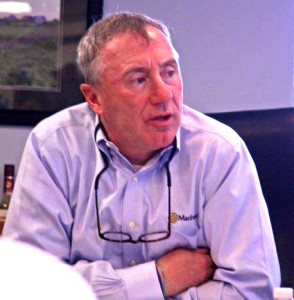 “Chances are that most every car will come through an auction during its lifetime,” said Tim Hoegler, general manager of the facility. “We’ve seen some cars go through five or six times. Unless a car only changes hands in a series of private sales, it’s likely going to see an auction.

“If a car sits on a dealer’s lot for more than 30 to 60 days, they’ll bring it back to the auction in hopes of getting their money back, and of bringing something else home to freshen their inventory.”

All 12 selling lanes in North Dighton were running during our Tuesday visit, each with its own auctioneer and drivers for every car. The Thursday night auctions are smaller and less pressurized. “We’ll run four lanes then,” Hoegler said. “It’s geared more towards smaller dealers, say a gas-station owner who fixes up a few cars to sell as part of his business.”

Such an auto auction is no place for the novice or the unprepared, so the proceedings are limited to licensed dealers who are registered with Manheim. “You can make a $5,000 mistake in an instant,” Hoegler said.

“The buyers may not be wearing suits and ties, but they’re some of the smartest car guys around,” he added. “They’ve examined the inventory, they’ve decided beforehand what cars they’re going to bid on, and they know the order those cars will be coming through the lanes.” 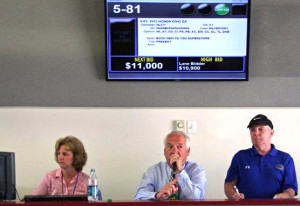 Auctioneer Mike Chambers (center) works his lane on a Tuesday in June with Boch rep Billy Ryan alongside and a clerk taking on-line bids.

Hoegler’s auctioneers, who can earn up to $900 per day, run each car through in 30 to 90 seconds. “The average auctioneer sells about 50 percent of the cars in his lane,” said Hoegler. “The best will do 70 percent or more. But remember that the seller, who is standing right there, has the final say on whether to accept the top bid.”

Bidding isn’t limited to dealers in the building, either. Today about a third of buyers operate online and can bid from all over the world. But “you want to keep as many people in the tent [a modern building, actually] as possible,” Hoegler said. “We never want to lose that sense of excitement that you’re feeling today.”

Every vehicle goes through its lane under a computerized board that presents its vital statistics as well as a Condition Report (a number between 0 and 5, with 3.0 being “average”) and one or more colored lights: Red—the vehicle is being sold as is. Green—the car has no single needed repair that would cost more than $500. Yellow—it has known and documented problems. Blue—title is not available at this time. 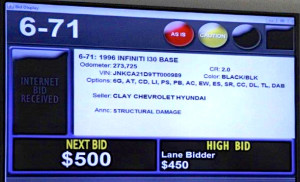 Even though new-car sales plummeted during the recession, the auction business also was affected because used-car values shot up. Dealers began keeping trade-ins with 80,000 and even 100,000 miles on their odometers—cars that previously would have gone straight to auction. In 2000, a $5,000 used car might have had 84,000 miles on it; in 2013, the same money would buy an equivalent car with more than 120,000 miles on it.

During our visit, Hondas and Toyotas in particular and Asian cars in general seemed to be best-sellers—possibly because the Boch dealerships were running cars through one lane and Billy Ryan, Boch’s seller, “has a well-earned great reputation,” said Hoegler. In another lane, Hertz was holding a closed auction for Chrysler dealers, and in still another Enterprise had a TRA—total resource auction—in progress, featuring cars wrecked by renters but full of sought-after parts.

Meanwhile, there was still more bidding going on in the Manheim office as transportation companies competed to deliver the freshly sold vehicles to their new owners’ lots. By noon the lanes were empty and dealers were settling up at the clerks’ windows, hoping the cars they’d bought would be winners.

The North Dighton operation is average-sized for Manheim, with almost 1,700 cars passing through 12 sale lanes each week on Tuesday morning and Thursday night. By comparison, Manheim’s Pennsylvania operation has 33 lanes and can move 10,000 cars a day.